Architecture firm Snøhetta has installed a smile-shaped aluminium bench at the United Nations Headquarters in New York to promote "a message of peace and conflict resolution."

Currently on display outside of the UN Headquarters in New York, The Best Weapon is a six-and-a-half meter-long seat that Snøhetta created for the Nobel Peace Center. Its name originates from Nelson Mandela's historic quote:"The best weapon is to sit down and talk".

"The Best Weapon delivers a message of peace and conflict resolution, both as a functional piece that encourages conversation and social intimacy, and as a resilient symbol that anchors the Nobel Peace Center's mission for discourse and peace," Snøhetta said.

The sculptural bench is curved to bring users closer to one another, forcing them to converse.

"Designed as a partial circle that meets the ground at its lowest point, the gentle arc of the bench pulls those sitting on it closer together, subsequently and subtly encouraging dialogue," it said.

The sculptural bench honours past Nobel Peace Prize laureates and the efforts they made to encourage dialogue in the midst of conflict. It is situated alongside the bronze "knotted gun" sculpture by Swedish artist Carl Fredrik Reuterswärd, which has become a global symbol of non-violence.

"Sited in such a prominent location both symbolically and physically, The Best Weapon takes on multiple valences through this dialogue with its neighbour," the firm added. 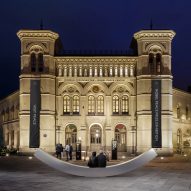 Snøhetta collaborated with Norwegian outdoor furniture producer Vestre and aluminium specialist Hydro to develop the installation, with a process that it claims is "completely carbon neutral." It uses anodised aluminium from Hydro that produces "significantly lower greenhouse gas emissions than the industry average".

This material was also selected because of its high resistance to corrosion and protection against scratches. It has been bead-blasted and pre-distressed to ensure its longevity.

The Best Weapon was installed outside the United Nations Headquarters in New York City on Nelson Mandela Day, 18 July 2019. It will remain on show until October 15th, after which it will be transferred to its permanent site at Nobel Peace Centre in Oslo, where the Nobel Peace Prize is awarded annually.

The firm's other recent projects in the United States include a library for Temple University that features "unusual geometry" and plans to design a Research and Engineering Center for Ford in Michigan.

Photography is by Bjørnar Øvrebø unless noted otherwise.