Brutalism and underground fight clubs were used as a point of reference for VSHD Design when designing this gym in Dubai.

Set within a Dubai shopping mall, the gym is the latest outpost from fitness company Warehouse Gym. It already has five branches across the city, which each seek to blend exercise and club culture by providing live DJs and nightclub-style lighting during workouts.

For the Springs Souk location of Warehouse Gym – which is shortlisted in the 2019 Dezeen Awards – Dubai and Montréal-based studio VSHD Design wanted to create an exercise space with an "underground feel" for "serious workouts".

Instead of the singular, fully-lit environment of a traditional gym, the lighting system can create a variety of moods and accentuate individual spaces and activities.

Circular niches have also been carved out of the ceiling and backlit to appear as faux skylights.

The concealed network of lighting is installed on a customised grid structure with a track system that runs in all directions throughout the space.

The flexible tracks are fitted with two kinds of spotlights that focus on the gym's equipment and stations. The spotlights can be adjusted in number and intensity according to the requirements of each training zone.

By combining the brutalist design elements with state-of-the-art lighting, the studio hoped to recreate the feel of an old fight club.

In addition, LED mood lighting has been fitted behind a series of 10 round mirrors, illuminating the stamped concrete texture of the walls.

These mirrors have also been positioned so that they reflect each other, creating a seemingly endless repetition of circles.

"The mirrors create the illusion of an infinite light tunnel, collectively reflecting to create a sense of unlimited space and light," said the studio.

"Its design is based on the idea of infinity and beyond; stretching the views through endless reflections. The way light and space interacts, sometimes light defines space; other times space casts light creating beautiful optical illusions."

To minimise the project's environmental footprint, the studio said that, where possible, it strived to use locally sourced materials and fixtures.

"From basic construction materials, to the grid system, mirrors, furnishings and finishes, the entire project was locally manufactured and procured which promotes local businesses in those industries," it explained. 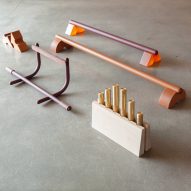 Work in Use designs exercise equipment from fine materials

"The use of raw concrete; an environmentally friendly material with natural components was an integral part of our design intent which we consciously incorporate to provide sustainable spaces that can easily be maintained."

VSHD Design isn't the only studio to create a design-focused exercise space – earlier this year Montalba Architects completed Vancouver's Equinox gym with walnut, marble and blackened steel surfaces so that the space evoked a "sculpted canyon".