Bleached walnut, blackened steel and various types of marble feature in this high-end fitness centre by Montalba Architects, which was designed to evoke a "sculpted canyon".

Equinox Vancouver is located within an office tower in the city's downtown district.

It is one of several new locations for the New York-based fitness brand, which operates about 100 luxury gyms in North America and London, including a Los Angeles facility by MBH Architects.

The Vancouver site – the third in Canada – was designed by Montalba Architects, which has offices in LA and Lausanne, Switzerland.

The design team drew upon the city's architectural landscape, as well as the surrounding natural environment.

The notion of a "sculpted canyon" emerged and drove design decisions within the two-storey, 30,000-square-foot (2,787-square-metre) gym.

Bleached walnut is employed throughout the club – a material that was specifically chosen for the Vancouver location due to its high number of the trees.

Hints of contrasting black and white marble are incorporated in various areas, as are reflective metallics.

The material palette aims to embody "the perfect meld of modern urbanity of the city while saluting the pristine natural elements of the Pacific Northwest".

Guests step into a double-height lobby with a smoked-mirror ceiling and poured concrete floor. The lofty space is intended to draw patrons in and establish a strong connection between the club's two levels.

"The grandeur of this central space is sharply contrasted by small intimate coves throughout that become retreats for social interaction," the studio said in a project description.

Visitors check in at an angular, black reception desk. Behind it, an accent wall is faced with slanted wooden boards. Offices for member services are housed within glass-walled rooms that are meant to feel highly accessible.

The lobby features an intimate lounge with a horizontal fireplace set within a grey, faceted wall. A concrete composite material brought in from Spain was used to cover the wall surface.

Decor in the seating area and elsewhere was sourced from brands such as Tacchini, Stellar Works and Walter Knoll. Black, white and shades of grey give the interior a modern, industrial feel. 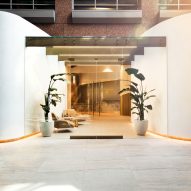 A prominent, blackened-steel staircase connects the lobby to the upper level, where the workout areas are located. Corridor walls are lined with porcelain tiles from Italy.

"Rich, natural materials of stone and wood create subtle texture throughout, returning to the conceptual canyon while working to programmatically define spaces and guide patrons to main walkways," the studio said.

The club contains a half-dozen studios for pilates, barre, yoga and other classes. Cove lighting emits soft light, while patterned wallpaper adds a sense of energy and movement.

Studio floors are covered with either walnut or porcelain tiles, while rubber was used in the cardio and strength-building areas.

Equinox was established in New York in 1991 as a subsidiary of the major US developer Related Companies.

The brand has just launched a chain of hotels, with the first opening last week in New York's Hudson Yards. According to the New York Times, others are planned for LA, Seattle, Chicago, Houston and Santa Clara, California.

Photography is by Luis Alberto Valdizon.