Researchers at the Clinatec laboratory in Grenoble have created an exoskeleton, which paralysed users can control with their mind in order to help them move both their arms and legs.

This marks the first time that a prosthetic exoskeleton was successfully used to help a quadriplegic patient move all four of their immobilised limbs.

The venture is part of the Brain Computer Interface Project between the French Alternative Energies and Atomic Energy Commission (CEA) and Grenoble University Hospital.

The major innovation behind it is not the exoskeleton itself, but an implant called the Wimagine, designed by microelectronics experts at the CEA research institute, which can record and wirelessly transmit the patient's brain activity.

Two of these are surgically placed on the surface of the brain – one to the right of the sensorimotor area, and one to the left.

Each comes with 64 electrodes, which are used to record the electrical activity in the brain that is tied to the wearer's intent to move. The Wimagine, running on a remote power supply, can digitise this information and transfer it to a computer for decoding.

Here, a sophisticated machine-learning algorithm deduces the intended movements behind this raw data – arm or leg, left or right, up or down.

The algorithm is continually adapted to improve the accuracy of these decisions, based on the steady stream of new input received from the Wimagine.

An especially developed software is then able to use these instructions to actually control the exoskeleton in real-time. The technology is an advance on previous versions of an implant that links the nervous system to a computer, which have been limited to controlling the function of a single limb. 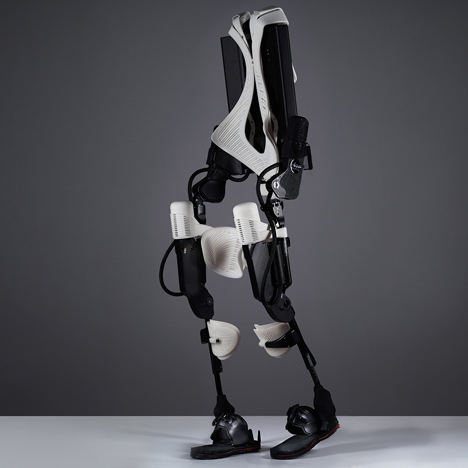 The 65 kilogram, four-limb exoskeleton itself was developed by CEA research engineers.

It was first tested on a 30-year-old tetraplegic patent called Thibault – who chose not to share his last name – as part of a clinical study published in The Lancet medial journal.

The Wimagines were implanted in his brain in June 2017 and in the 27 months since, he has had to train in order to be able to use the exoskeleton – first by controlling an avatar in a virtual environment and finally by moving the shell itself.

After having no control over any of his four limbs, he is now able to take several successive steps, move both of his arms and rotate his wrists.

For now, the exoskeleton can only be used in laboratory conditions, as it needs to be held up by a harness secured to the ceiling in order to minimise the risk of falling.

"This device is an important step forward in helping people with disabilities become self-sufficient," said Professor Alim-Louis Benabid, a neurosurgeon and lead author of the study.

"We are extremely proud of this proof of concept and are already considering new applications to make everyday life easier for people with severe motor disabilities."

In the coming years, the team will work with three more patients to develop even more precise algorithms to interpret a larger volume of the brain's electrical signals at a faster pace.

Previously, a 3D-printed exoskeleton has been used to help paralysed users walk again, however this system was limited to the lower limbs and could not be controlled through the wearer's thoughts.

Elsewhere, scientists have developed an "e-skin" that could help to create prosthetics which are able to provide sensory feedback to the wearer.

Photography is by Juliette Treillet on behalf of the Fonds de dotation Clinatec.