Dutch architecture firm Space&Matter has turned a series of redundant canal-side bridge keeper's houses in Amsterdam into the SWEETS hotel.

Connected by the city's waterways instead of corridors, the suites occupy 28 different bridge houses and are collectively known as SWEETS hotel.

The bridge houses were built along Amsterdam's canals between 1673 and 2009 and each suite is decorated to reflect the architectural history of that particular building.

For over 100 years the bridge houses accommodated the city's many bridge keepers who were responsible for opening the bridges for passing water traffic.

Due to centralisation of bridge control, the bridge houses became redundant. The SWEETS hotel project repurposes these historical buildings, preventing them from falling into disrepair or being demolished.

"With building dates between 1673 and 2009, the bridge houses carry an extensive history," said Space&Matter. "Visiting them in chronological order is like a journey through time: their various architectural styles reveal how the city developed and grew."

Many of the city's bridges and bridge houses are designed by renowned Dutch architects with distinct architectural ideas.

"A bridge house was like the crown on top of their work," explained the firm. "Instead of having many technical restrictions while designing the bridge itself, the architect could put all his creativity in designing the tiny house on top."

"During so-called 'design picnics' with all development partners on location, we choose which elements to preserve and which to play with."

For example, at the Amstelschutsluis bridge house, which was built in 1673, the architects uncovered an old chimney above the ceiling which they decided to leave in place as a design feature.

Meanwhile the suite's new interior mixes the materials and colours that were typically used in 17th-century Holland with contemporary furnishings.

For the interior of the soon-to-be-finished Hortusbrug bridge house – a bridge house in the style of De Stijl – the architects looked to Dutch architect and designer Gerrit Rietveld for inspiration. 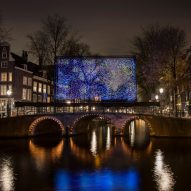 Space&Matter said that the most challenging aspect of the project was squeezing everything into such a tiny footprints.

"Transforming bridge houses into hotel rooms is easier said than done," said Space&Matter. "The tiny houses, some with a floor size as small as 12 meters squared, were not designed for people to sleep and shower in."

The floor of the Nieuwe Amstelbrug bridge house, for example, was originally just a few square metres. In order to put in a bathroom, double bed, seating area and small pantry, the design team decided to take out the ceiling and dig into the ground, so that there would be enough space for three floors, connected by small staircases.

The SWEETS hotel is in the running for a Dezeen Award after making the shortlist in the Hotel and short stay interior category.

The first 11 bridge houses were officially opened on March 15 2018. Four have been added since then, while another 13 will be completed in phases.

Another recently-announced unique hotel concept is North Pole Igloos – a group of portable heated glass igloos which will be placed at the North Pole by Travel agency Luxury Action. Billed as the "northernmost hotel in the world" each pod would have glass walls and ceilings to allow guests to watch the northern lights play across the Arctic sky at night.