Brooklyn designer Fernando Mastrangelo has used a mix of black sand and resin to create the magma-like frames around this set of gold mirrors.

To craft the sculptural mirrors Mastrangelo used sand sourced from various locations around the world.

The form is created from sand mixed with epoxy resin to create three-dimensional geometric forms that is meant to emulate the appearance of volcanic formations. Mastrangelo hand dyed the gritty terrains, to give them a unique black colour, which were then attached to mirrors that have reflective gold-tinted faces.

"Though the material is not literally magma from a volcano, Mastrangelo has used his signature materials and methods to masterfully emulate the unique way that magcalcifies into igneous rock formations," the studio told Dezeen.

Magma forms part of a series of work that the designer has created to draw attention to the climate change crisis by mimicking natural forms. 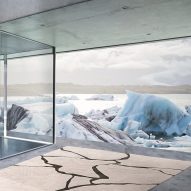 As with the other works – which include a rug collection influenced by the patterns of breaking ice sheets and mirrors and tables modelled on snow melting on mountain peaks –  its form and materiality are intended to provoke a message warning of the effects climate change has on the beauty of nature.

"The forms and textures suggest a landscape that has surpassed healthy temperatures and decayed to an existence of extreme heat," said the studio. "It is through Magma that Mastrangelo hopes viewers will consider their stake in climate change."

"For me, the Magma series references the global tension and worry in regards to our impending climate crisis," Mastrangelo added. "I feel that there is so much pressure rising to the surface and it's bound to erupt; I hope not in the form of disaster but in the form of energetic action."

Each frame was individually commissioned and unique-in-form. For Magma Edition 01 the designer sculpted black sand to cover most of the reflective surface apart from a small triangular shaped opening, it is on display at 1stDibs Gallery in New York City.

An arch frames the mirror of Magma Edition 02, which can be viewed at Mastrangelo's studio in Brooklyn.

Photography is by Fernando Mastrangelo Studio.