Arches spring up across the ceiling of this apartment in Taiwan, which Very Studio has overhauled to appear more bright and spacious.

Set within a residential block in the city of Taichung, the Sunny Apartment previously featured a light-starved living area with poor ventilation – a majority of the home's windows had been isolated to the building's south elevation.

To make the 200-square-metre apartment more accommodating for a family of four, locally based Very Studio devised a design scheme that focused on three elements it felt defined the "essence of living": space, air and sound.

Partition walls have been rearranged to loosely form a pentagonal-shaped floor plan that angles sightlines towards the apartment's few windows.

The ceiling has been turned into a series of vaults, giving the impression of a taller and more lofty living room. Each arch has an internal timber frame that was cut using a CNC-milling machine.

"We wanted to create a shared space as one room, a space with fluidity. Therefore, we thought about modifying the level of the ceiling," the studio told Dezeen.

"We also wanted to erase the edge-line of the ceiling, then the idea for the domes appeared," it continued.

"[The clients] were wondering whether to accept the proposal – they couldn't imagine the space just by drawings and renderings."

To ensure the new ceiling hadn't affected the sound quality throughout the apartment, the studio used Odeon – a computer modelling software that's able to test and simulate the acoustic performance of unbuilt spaces.

It assessed a variety of factors including sound-pressure levels, speech intelligibility and music clarity.

The dining table, a cream, leather sofa and a couple of bench seats run down the middle of the living room, inviting inhabitants to gather and interact.

More private areas like a reading nook and study have been tucked inside the arched niches that appear along the apartment's peripheries. 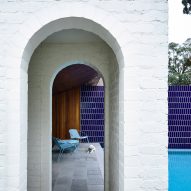 Surfaces throughout have been painted white to keep the space bright, while several spotlights have been dotted across the ceiling to provide additional artificial light.

The Sunny Apartment is shortlisted in the 2019 Dezeen Awards – it will go head-to-head against projects such as Vallirana 47, a Barcelona apartment block that boasts opulent interiors and The Biscuit Factory, a London flat which occupies a former baking room.