Charles Jencks, architecture historian, landscape architect and director of Maggie's Cancer Care Centres has passed away at the age of 80.

Jencks is widely regarded as the leading thinker on postmodernism in architecture, which he defined with his seminal book, The Language of Post-Modern Architecture.

He died yesterday at his home in London, the Maggie's Centres charity has confirmed.

Jencks co-founded Maggie's Cancer Care Centres in 1995. To continue the legacy of his late wife Maggie Keswick Jencks, the charity commissions major architects to design comforting places of respite for those afflicted by cancer, as well as their friends and family.

Norman Foster, Amanda Levete and Frank Gehry are among the illustrious list of architects who have designed a Maggie's Centre in locations across the UK and now mainland Europe.

Tributes poured in from the architecture community upon news of his passing.

His friend and collaborator Norman Foster called Jencks a "doyen of architectural criticism".

"Charles showed remarkable strength and fortitude to turn a personal tragedy into an institution that brings so much hope to so many people. I will always remember him for his incisive focus and infectious humour that inspired all of us during the numerous design discussions for Maggie’s Manchester."

Jencks' house in Holland Park, London, was Grade-I listed by Historic England in 2018. He designed it along with his late wife and the postmodern architects Terry Farrell and Michael Graves.

Plans are afoot to turn it into an archive museum called the Cosmic House, which will be open to the public by appointment only.

His house in Scotland, Portrack House, is already home to the Garden of Cosmic Speculation. Jencks drew on his enduring interest in cosmology, science and nature to create a 30-acre sculpture garden around the maths of black holes and quarks.

Fractal Terrace, DNA Garden and Comet Bridge are sculpted land-formations, fences and pathways open for visitors to explore once a year to raise funds for Maggie's Centres.

"To see the world in a grain of sand, the poetic insight of William Blake, is to find relationships between the big and small, science and spirituality, the universe and the landscape," Jencks wrote in his statement of intent.

"This cosmic setting provides the narrative for my content-driven work, the writing and design," he continued.

"I explore metaphors that underlie both growing nature and the laws of nature, parallels that root us personally in the cosmos as firmly as a plant, even while our mind escapes this home."

Born June 21 1939 in Baltimore, Maryland, Jencks undertook a degree in english literature at Harvard University before studying architecture at the Harvard Graduate School of Design.

After graduating in in 1965 he moved to England, where he did a PhD in architectural history at University College London. Over the course of his studies he learned under the tutelage of the modern architecture critics Siegfried Geidon and Reyner Banham.

Jencks' PhD thesis became his 1972 book, Modern Movements in Architecture. He went on to write The Language of Post-Modern Architecture, which examined and categorised the variations of architectural style that came after modernism.

He wrote a further overview on modernism in his 2007 book, Critical Modernism - Where is Post-Modernism Going? where he argued that postmodernism is a criticism of modernism that came from within modernism.

Jencks was also one of the first architecture critics to identify the trend of the celebrity architect and the landmark building.

His book, The Iconic Building, unpacked the symbolism of prestige buildings such as Foster's Gherkin, arguing that they were symptoms of the rapacious greed of property developers and the unchecked egos of architects. 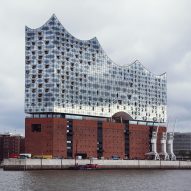 In his own architecture career, Jencks designed Garagia Rotunda, a studio built in 1977 in Cape Cod, Massachusetts, that he used with his family. He used prefabricated materials and cobbled together the structure on an ad-hoc basis for just $5,000 (£3,900).

When his wife asked him to help her design a garden for their family home in Scotland, Jencks became a landscape architect.

Following the Garden of Cosmic Speculation, he won commissions for a landform outside Scottish National Gallery of Modern Art in Edinburgh, the Life Mounds at Jupiter Artland sculpture park, and Black Hole Landscape in Pune, India, among others.

He also designed sculptures inspired by DNA, which are displayed in Kew Gardens and Cambridge.