The interchangeable steel grid of windows, shelves and lockers of a school in Sneung, Cambodia, designed by Orient Occident Atelier can also be used as a climbing frame.

Built for local NGO Adventurous Global School, the structure provides a set of classrooms spaces that can be used by the entire village.

Orient Occident Atelier  made the school's construction into a learning opportunity by engaging local children in the process. The project has been shortlisted for a 2019 Dezeen Award, and winners are being announced today.

This level shelters the open air classrooms below, and an open-air amphitheatre space cuts through the centre of the structure, topped by a gullwing roof.

Affectionately named "Griddy", the envelope that wraps much of the structure is formed by a double-skin of steel grids.

Wooden and acrylic panels have been inserted to create both translucent openings and shelves.

"Its detail and ironmongery allow the reconfiguration of the openings, shelves and lockers," described the studio.

"Local kids explore the uses of the new uses of space by action – they climb Griddy as though it is a jungle gym." 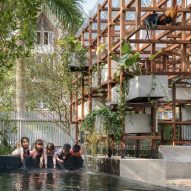 Climbing-frame library in Vietnam has a thriving aquaponics system

A concrete frame supports the rest of the structure, infilled with perforated brick walls to help naturally ventilate the upper classrooms.

Classrooms at the ground floor level have purposefully been left completely open to the surrounding village, allowing other villagers and students to listen to or join in with classes.

"The ground classrooms are seamlessly connected with adjacent houses and fields, in which the relationship between interior and exterior can be customised by users," explain the studio.

"The building is not merely a cluster of classrooms but a social hub where the provision of education, sanitation, retail, community infrastructure and gathering space could be possible."

Materials were chosen due to being common to the area, allowing local workers able also engage in the building process.

In a village ravaged by Cambodia's Khmer Rouge Regime, the practice hopes that the Adventurous Global School is the start of wider regeneration. It is also working on schemes to improve access to clean water.

Other groups, such as the Green Shoots Foundation, are also working to improve education provision in Cambodia.

Photography is by Magic Kwan and Kenrick Wong.