Google has created a fabric made of recycled plastic for the latest version of the Nest Mini speaker, which launched today along with an updated Pixel smartphone with two cameras on its back.

The Google launches include a laptop, wireless internet system, a cloud-gaming service, Pixel 4 smartphone and the second generation of the Nest Mini speaker.

"For a while, that's what we were doing, and that's why design needs to kick in," she added. "We are optimistic about what we can do."

A single, one-litre plastic bottle is used as part of the fabric to cover for two Google speakers. The hard shell portion is also made from 35 per cent post-consumer, recycled plastic.

The smart speaker comes in four colours: chalk, charcoal, coral, and a new blue shade called Sky, which draws on Italy's Lake Como. All of the coloured yarn covers are made from the upcycled plastic material.

"We didn't want it to be choosing between sustainable or beautiful, but it needed to be both," Olsson said.

Another product launched by Google that is made from recycled plastic is the Nest Wifi system, which is in its second generation. It consists of a router that connects to a modem, and a Google Point that you plugin for wherever you need internet coverage.

"We believe that if you buy the next generation, you shouldn't feel like the old generation is old, but it's something that you compliment with," Olsson continued.

"So where we focused our design innovation this time was really on developing this new tech style."

The Google Assistant is built into the Nest Wifi's Point device, which allows the product to act like smart speakers that respond to the user's voice.

Also part of the launch is the Pixel 4 phone, which features rounded matte edges and two camera lenses on the back designed to offer better images.

The lenses are designed together with a flash and sensor, all concealed under a square-shaped glass covering as opposed to Apple's multi-lens iPhone 11, which launched last month with three circular lenses. 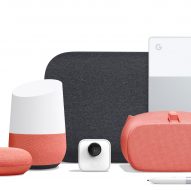 Google opted for the glass cover so the phone did not look "like a bunch of eyes looking at you, and kind of overly techie," Google director of industrial design Max Yoshimoto told Dezeen.

"We said, how do we do something that feels more simple or less intimidating, in a much more friendly," Yoshimoto said.

The camera on the Pixel 4, which also comes in a larger version Pixel 4 XL, includes improved capabilities for taking nighttime shots, as well as the ability to take clearer, more colourful outdoor photographs and "motion-blurred portraits".

The smartphone is complete with Google Assistant, which relies on voice-command to navigate certain applications and quick tasks, such as searching on Instagram, texting or taking a photo. Other features are facial recognition and motion sensing, which uses hand gestures to control the phone without touching the screen, including skipping to the next song.

Another new Google product is a cloud-based gaming platform, Stadia, that runs on Google Cloud.

A controller for the system comes in three colours – white, black and a green-and-blue design called Wasabi – and feature a Google Chromecast device as well.

Options for gaming subscriptions are priced monthly, and the premium version Stadia Pro will be available in 2020. For the gaming platform, Google claims it will match 100 per cent of the energy used for operations with renewable energy purchases, as part of its drive for sustainability.

Rounding out Google's product launch is a 13-millimetre laptop, Pixelbook Go, that has a textured back for "grip-ability" that lets you know which way to grab it when it is in your bag and what side is up or down. It is made of coated magnesium, as opposed to aluminium, to keep costs down while lending a warmer touch.

The laptop comes in black or pink colours, weighs about two pounds (one kilogramme) and has an Intel CoreTM processor.