Google's expanded line of tech-focussed products is distinct from its competitors for the way the items integrate with the body and home, according to the company's head of hardware design Ivy Ross.

Better known for its software, Google has stepped up its efforts to compete in the hardware market with a range that includes personal-assistant devices, translator ear buds, an AI-enabled camera, and a new version of its Pixel phone.

The company is fairly late to the game compared with other tech giants like Apple and Samsung, which have well-established product lines. But Ross, who has overseen Google's hardware department since September 2016, says that's no bad thing.

"It's one of the advantages to be almost the last ones to jump into the hardware," Ross told Dezeen at the company's recently opened pop-up space in New York last week. "You can stand back and say, this is what Apple feels like and looks like and is this brand. This is what Samsung is."

"I love them all, but our idea was to be differentiated and be true to Google," she continued. "So it's a design language that does set us apart, and keeps evolving within those guidelines that we set up."

These guidelines are intended to ensure that the products blend into the home. Using fabrics, neutral hues and small pops of bright colour, Ross believes that her team has leapfrogged the "black box" phase to create items that are much more in keeping with everyday life.

"The days are gone of the big black plastic columns," said Ross. "And that was very intentional, to look at the materials, the colours, the shapes that would literally fit into our life. Whether it's on our bodies or in our homes."

"We've now accepted that technology is a part of our lives. The goal is either to make it invisible now, and be magical, or fit in and blend in."

Ross has a background in fashion, and previously worked on design and product development for companies including Swatch, Calvin Klein and Gap. She was brought to Google in 2014 to lead the team for Google Glass, which was pulled from the market a year later while improvements were made, and has since taken charge of design for the full hardware division in her role as "vice president, design for hardware products".

Ross' goal has been to create an aesthetic for the products that is recognisable as Google.

"We really want to think about, when you hold Google in your head, what are the characteristics that really represent the brand," Ross told journalists at the pop-up.

"The first thing that comes to my mind is colour. But we wanted to do colour that was appropriate for the product, and we love the idea of a surprise of pops of colour, in all kinds of surprising places. And you'll see products in full colour where it makes sense, inspired by fashion."

The current design guidelines have been applied across the range of new products, which were announced at Google's keynote event earlier in October and will be gradually released over the next few months.

Most have been developed around software like the Google Assistant technology – the company's version of Apple's Siri and Amazon's Alexa, which responds to voice commands and communicates with the user.

Examples include the Google Home devices, which work as smart speakers and home control centres, and come in two new sizes. Both are wrapped almost entirely in a soft textured material and are available in a variety of subtle and bold colours.

The circular Google Home Mini is small enough to fit into a hand, while the Google Home Max is much larger than the original Home device revealed in November 2016. Several of these speakers in any size can be combined to create surround-sound or multi-room systems.

The Home products also link to the new Pixel 2 smartphones via Bluetooth and Wi-Fi. Users can ask their Home device for directions or to call someone, and the request will be completed by the phone.

The Google Assistant can be activated by squeezing the phone's sides, while changing between the front and back cameras happens with the flick of a wrist.

The Pixel 2 and Pixel 2 XL follow the first Google phones released last year. They have improved cameras that come with a portrait mode, and integrate a technology called Lens that can recognise objects in images and pull up relevant information.

Also for photography, a new hands-free camera named Clips uses artificial intelligence to learn when to take a good shot. The small square-shaped camera, with a coloured edge, wirelessly takes image bursts and syncs them to the user's chosen devices.

The wireless Pixel Buds in-ear headphones are linked with a braided fabric cord, and incorporate the voice assistant so they can be used to translate language almost instantly.

Other additions and updates to Google's product line include the Pixelbook computer – with a 360-degree hinge so it can be used as a laptop or tablet – an accompanying smart pen with Google Assistant built-in, and a virtual-reality headset.

All are available to test at the New York pop-up, Google @ Flatiron, located at 110 Fifth Avenue and open until the end of the year. 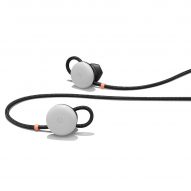