Designer Gavin Keightley used foods including mashed potato and jelly to create moulds for this furniture collection, which is cast from Jesmonite dyed in fluorescent hues.

The furniture collection, comprising two cabinets and a series of stools, features components made from plaster and Jesmonite that were cast in moulds fabricated from different foods.

University of Plymouth graduate Keightley told Dezeen that, throughout his studies, he enjoyed exploring alternative applications for materials and processes.

This culminated in an attempt to identify a new and more sustainable way of moulding materials.

"I do a lot of casting which means I need moulds to cast into," he explained. "A lot of the mould materials on the market are synthetic so I began hunting for a natural alternative that would do what I wanted it to."

One night during his student years, a failed attempt to cook a bowl of couscous resulted in a hardened mass that retained its shape when removed from the bowl.

Keightley realised that couscous and other foodstuffs could be used as a moulding material with unique properties that are expressed in the details of the resulting surfaces.

"I was inspired to take the label of food away from the material and explore food for all of its properties, not just the fact that we can eat it," he said. "That opened up a whole library of materials that are otherwise undervalued and underused."

The designer's favourite discovery was agar jelly, which comes as a powder that is mixed with water and heated before setting into its gelatinous form.

By removing sections from the jelly using a spoon, Keightley created a negative space suitable for casting. When the casting material sets, the jelly is simply removed by peeling it away.

A range of materials including bread, couscous, jelly and mashed potato were used to produce the collection, which demonstrates the potential for different foods to be used for casting.

Once the pieces are complete, Keightley gathers the food-based casting materials and composts them. He suggested that the next step is to grow his own food that can be used to create a more circular manufacturing process.

The designer chose Jesmonite as the casting material for the objects as it picks up all the details of the mould and won't react with the metal support-structures embedded in some of the furniture items.

It can also be dyed in any colour, including the fluorescent shades used to give the designs their distinctive character.

Keightley also experimented with other casting materials for different elements of the furniture. Handles on the drawers of the cabinets are made from pewter poured into moulds containing other foods including peanut butter, noodles, rice and mashed potato. 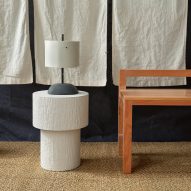 The most interesting effects were created by materials with a high fat-content, as the fat inside the mould would bubble when the hot pewter was added and create unusual, unpredictable textures.

The pieces were presented at the recent Decorex trade fair in London, where Keightley said he tried to encourage visitors to interact with the furniture.

"It's part of our instinct as humans to touch and feel things to gain an understanding of them," he added. "I wanted to create pieces that offer a multi-sensory experience. When people find out the furniture is made from food they want to smell it to see if there are any remnants of the manufacturing process."

Keightley developed the Terraform project as part of his masters at the University of Plymouth, which he completed in 2018 following his undergraduate studies on the school's undergraduate 3D Design – Designer Maker programme.

The project will next be exhibited at Dutch Design Week, which takes place in Eindhoven from 19 to 27 October 2019.

Designs exhibited at last year's event included a chair raised on blocks to highlight the problems associated with rising sea-levels, and a range of artificial flowers that provide emergency food sources for urban insects.