A thick thatched roof covers the top of this house with ceramics-filled interiors in Ukraine, which was built by architect and designer Sergey Makhno for his own family.

The house – named Shkrub after an affectionate term used by Makhno and his wife for the structure – is located in Kozin, south of Kiev.

The architect drew inspiration from his trips to Japan for Shkrub, including adding a Japanese-style garden filled with sculptures.

"When I went to Japan for the first time and saw how they appreciate their heritage, I understood that Ukrainian culture is extremely rich but we rarely rate it highly," said Makhno.

The house has is filled with a large collection of Ukrainian ceramics and has entire walls covered in ceramic tiles, also designed by Makhno.

A stone path winds through the garden and leads into a long, thin living and dining space, stretching the entire length of the home.

Adjacent to this is a dramatic, double-height living area  overlooking the garden with a full-height window.

It is lined with a shelving system that displays Makhno's pottery collection, built using wood recovered from abandoned houses.

A rough, plaster-lined staircase leads to the first floor, where a series of bedrooms and guest rooms for the extended family are arranged around a communal hall.

The hall tends in a balcony overlooking the double-height gallery and garden.

Each of the three children's rooms has been designed to be distinct.

One has dark, oak finishes, one has wallpaper designed by Makhno and thee third has walls painted with animals and birds by Ukrainian ceramicist Serhii Radko.

In the master bedroom, the headboard has been sculpted to look like a clay cliff. The bedroom is split into zones, with space to study, a recreational area and an en suite. 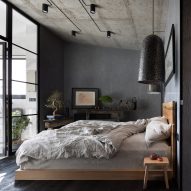 Throughout, walls have been finished with irregular ceramic tiles. These have several types of clay finish, usually mixed with flax seeds, rye and wheat in accordance with Ukrainian traditions.

The simple elevations of the home have been finished in thin, horizontal wooden beams atop a thin stone base, above which the thatched roof protrudes with cut-outs made for the upper-storey windows.

"When in five thousand years, archaeologists from other planets will dismantle my house, they will say that it was built according to ancient Ukrainian traditions. That there was a lot of nature, and a lot of life," said Makhno.

Sergey Makhno has previously worked on projects that attempt to blend Japanese and Ukrainian influences, including an apartment in Kiev where his family previously lived.

Photography is by Serhii Kadulin.