Eleni Meladaki is an associate architect at London studio ACME. She explains her career progression and the difference between practising architecture in Greece and the UK for the Dezeen Jobs careers guide.

Despite her senior role, she still has the opportunity to work on day-to-day design work and tasks: "we have a relatively flat hierarchy [at ACME], which means that I am still hands-on."

Meladaki moved to London to study at the Architectural Association, after initially completing her bachelor and masters at the National Technical University of Athens (NTUA), and practising as a registered architect in Greece.

This meant that she had already worked on a range of residential and commercial schemes, as well as competitions when she re-enrolled to study in London. 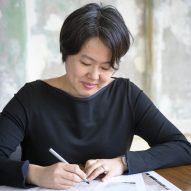 The move to London has been her career highlight, and "has changed the way I practise and think about architecture", she explained.

"London allows practices to experiment with design and push boundaries," she said. "They have the available resources to do so, given that projects in many instances are of larger scale and with bigger budgets."

She admits that becoming an architect was "not a childhood dream" given that she "drew terribly and still cannot sketch well", but during her late teens she started to see the potential of design from close observation of her surroundings.

This interest developed further during her early years at NTUA where she developed "a strong desire to shape spaces and explore materials".

Meladaki described patience as the most important skill she's gained throughout her career: "I had to build it up beyond what I thought was necessary," she said.

"It takes time to develop an idea, convince a client or teach a junior colleague, but it always pays off."