Lexus considered the relationship between a horse and its rider when designing the LF-30 Electrified concept car, which represents the Japanese brand's vision for a future generation of electric vehicles.

With fluid lines and gull-wing doors, the LF-30 Electrified concept was designed to have a futuristic look that is "expected of a BEV" (battery electric vehicle).

Lexus debuted the concept car ahead of the 46th edition of the Tokyo Motor Show, which runs from 25 October until 4 November 2019.

According to the carmaker the LF-30 Electrified embodies its vision for a future generation of electric vehicles. Lexus plans to unveil its first BEV in November 2019, and is aiming to have electrified versions of all its models available by 2025.

The LF-30's exterior is designed to visually represent the flow of energy that would take place inside the car as a result of its in-wheel electric motors, which see motors on each of the four wheels directly power the wheels.

As a BEV, the car doesn't have an opening bonnet. Lexus' characteristic spindle shape therefore spans the entire vehicle, with window glass extending from the front of the car to the rear.

"Muscular wings" on each side of the car and wing-shaped headlights form the contours of the spindle, and work with the pointed design of the rear lights to create an aerodynamic form.

Able to be driven or autonomously drive itself, the LF-30 Electrified has a colour-changing front face that displays luminescent patterns to signal whether it is working in normal or driverless mode.

The car's exterior is finished with a metal-infused coating in the colour "voltaic sky", which completes the futuristic theme of the concept with a blue-green hue.

Despite it's futuristic exterior, the designers of the LF-30 Electrified looked back to a simpler time for the car's interiors, which are informed by the dynamic between a horse and its rider.

The cockpit design was inspired by the Japanese concept of Tazuna, which is used to reference the way in which using a single rein can create a mutual understanding between the horse and the person riding it.

With this in mind, the switches on the steering controller are co-ordinated with the head-up display so that the driver can operate functions such as the navigation, audio system and driving mode selection without having to look away from the road or use manual switches. 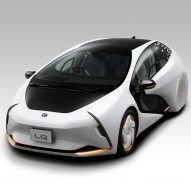 Various interfaces allow communication between car and driver – a glass roof above the rear seats can be operated using voice control, while a gesture-controlled window display uses augmented reality to present media and vehicle information.

An on-board AI character can also adjust functions such as air temperature, audio and navigation routes, and suggest activities when the car has reached its destination.

It can recognise the driver's preferences and use this to help them control the suspension and powertrain settings in real-time according to driving conditions.

While the LF-30 Electrified has the option for autonomy, it aims to channel the "original fun of driving" with newly developed posture control features and electrification technologies that "further evolve driving pleasure".

The concept includes a steer-by-wire system, which uses electrical connections instead of mechanical linkages to control the car, allowing for more precise and flexible turning control.

When in autonomous driving mode, the steering controller can be moved forwards out of the way to create more space in the interior.

The layout of the front passenger area is based on a first class aeroplane seat, giving the impression of being both open and enveloping.

The rear seats use artificial muscle technology to mold to the occupant, and include different modes suited to the passenger's mood such as reclining, relaxation and alert.

Speakers built into the headrests have a noise-cancelling feature to enhance the quietness of the cabin quietness, and the opacity of the side windows can be adjusted to allow occupants to either enjoy the view or have a more private setting.

Other future-forward aspects of the LF-30 Electrified concept include the sustainable materials used for the interior. The traditional Japanese Yakisugi wood, a charred cedar, is used in the floor and steering controller, while recycled metal was processed into fibres to create the pleated door trim.

Toyota, Lexus' parent company, is also presenting its latest concept vehicles at this year's Tokyo Motor Show, which is taking place in the Japanese capital from 24 October until 4 November 2019.

Both fully electric and equipped with an automated driving system, the car brand's LQ concept features an on-board AI-powered, interactive agent, called Yui, which provides a personalised mobility experience by learning and responding to the driver's emotional and physical state.