The Toyota LQ is both fully electric and equipped with an SAE level four equivalent automated driving system, meaning no human intervention is needed to drive the vehicle.

Its main feature however is the on-board AI-powered, interactive agent, called Yui, which provides a personalised mobility experience by learning and responding to the driver's emotional and physical state.

According to Toyota, the LQ concept is based on the idea that "mobility goes beyond physical transportation to include the human need to be moved and engaged emotionally".

These AI features include an an air-conditioned seating system that self-adjusts according to the driver's levels of alertness and relaxation, and an automated valet parking feature.

The car also includes LQ's augmented reality-enhanced "head-up" display, which presents the car's driving information such as lane warnings, road signs, and route guidance without the driver having to look away from the road.

In addition to the typical transparent head-up display, the LG uses augmented reality to expand this data display area to the windscreen to further reduce the driver's eye movement.

As a safer alternative to buttons, drivers can engage with the AI agent using interactive voice communication. This can be used to activate in-seat functions designed to increase alertness or reduce stress, to turn on the air conditioning, to release fragrances, or to turn on lights inside the car.

Yui can also select and play music based on the driving environment, and provide real-time information on topics of interest to the driver.

Other personalised safety features include the LQ's smart seats, billed by Toyota as "a world first in seating technology".

Embedded with a series of inflatable "air bladders", the seats work with an in-seat air conditioning system to help keep the driver alert or relaxed depending on the situation.

When the system recognises that the driver is tired, it inflates the air bladder in the back of the seat to support an upright sitting posture, and directs cool air onto them. 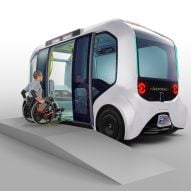 When conditions, such as the car being in automated driving mode, allow the driver to relax, the air bladder gradually inflates and deflates in time with their breathing.

"In the past, our love for cars was built on their ability to take us to distant places and enable our adventures," said LQ development leader Daisuke Ido. "Advanced technology gives us the power to match customer lifestyles with new opportunities for excitement and engagement."

"With the LQ, we are proud to propose a vehicle that can deliver a personalised experience, meet each driver's unique mobility needs and build an even stronger bond between car and driver," he continued.

The concept car communicates information about the vehicle to the passengers via the roof and floor mat areas.

Integrated lights show different colours to indicate if the car is in automated or manual driving mode. These lights illuminate different foot wells depending on which passenger Yui is addressing.

The LQ can also inform people both inside and outside of the vehicle about road surface conditions using the Digital Micromirror Device installed in the car headlights.

This system can activate one million tiny embedded mirrors to project complex figures onto the road ahead.

In addition to being powered by an electric battery, Toyota's LQ aims to help the environment by using technology to clean harmful emissions.

The concept boasts a newly-developed catalyst coating designed to purify the air as it moves. It works by decomposing ozone – a colourless unstable toxic gas that is a cause of photochemical smog – near the ground surface into oxygen on the radiator fan.

According to the car brand, over the course of a one-hour drive, the coating can purify about 60 per cent of ozone contained in 1,000 litres of air.

Toyota chose to name the concept "LQ" to express its hope that the vehicle's modern features will "cue" the development of future vehicles that enhance the relationship between car and driver.

The LQ will make its debut at Future Expo – a special exhibition running at this year's Tokyo Motor Show, which will take place in the capital from 24 October until 4 November 2019.

Toyota will also be displaying its e-Palette at the motor show, which will be used to transport athletes and staff around during the Tokyo 2020 Olympic and Paralympic Games.