Major development spurred on by the 2020 Tokyo Olympics has greatly reduced opportunities for smaller architecture studios in the city, according to Atelier Bow-Wow.

The upcoming Olympic Games has provided few opportunities for local designers and development related to the event has forced many smaller studios to look for work outside the city said Atelier Bow-Wow founders' Yoshiharu Tsukamoto and Momoyo Kaijima.

"We independent artists are banned and totally deleted from the list of the designers," Tsukamoto said.

"They want a big firm, a corporate firm to work together with a construction company," he continued. "There's no chance for independent architects. We are totally kicked out of Tokyo."

Tsukamoto and Kaijima spoke to Dezeen about the architectural climate at the opening of the Made in Tokyo at New York's Japan Society. The studio curated and designed the showcase compare the Japanese city at the time of the 1964 Summer Olympics, which was also held in Tokyo, with the current situation.

"We are architects who are not necessary for Olympic Games 2020"

When asked about the impact of next year's tournament on the city, Tsukamoto said that stringent regulations had left younger, emerging studios like themselves out of the running.

He cited the process used to select Japanese architect Kengo Kuma as the architect of the National Stadium as an example of the issue.

Kuma was chosen following an anonymous competition – after the Japanese prime minister scrapped plans for a stadium designed Zaha Hadid in 2015 – which Tsukamoto said had tough requirements.

"The only chance for an independent architect was the competition of the main stadium, but with conditions that the architects should very renowned, like a Pritzker Prize etc," Tsukamoto said.

"It limited the number of architecture firms that could participate," he added. "So we are somehow architects who are not necessary for Olympic Games 2020."

"Opportunity to redistribute the population from Tokyo"

Atelier Bow-Wow, which was established in Tokyo in 1992, are among a number of architecture studios that are focusing instead on the outskirts of the capital. Tsukamoto believes the process could work to an advantage by diluting the concentration of the busy capital, and provide better opportunities for studios.

"Architects are really working outside of Tokyo but it's very interesting," he said. "It's our opportunity to redistribute the population from Tokyo."

"It's an urban rural exchange programme and there are so many chances, so many interesting things because in farming areas, people are still living in the kind of ethnographical network of things," he added. "So they're not so much contaminated by industry."

Currently on show at the Japan Society in Midtown Manhattan, Made in Tokyo compares the architectural scene in 1964, when Tokyo was recovering from the devastation caused by the second world war, with developments created ahead of the year 2020.

"In 1964 we saw many projects influenced by the recovery of the World War Two," Kaijima told Dezeen. "Because Tokyo was totally bombed in the war, most of the places were vacant land, so architects were very encouraged to design a new idea, a new society for the Olympics."

Exhibition explores Tokyo today with the city in 1964

Transformations are compared across six areas – stadium, station, retail, office, capsule accommodation and home – and take into consideration a range of factors like the inflation of housing prices known as the bubble economy, which then popped in the 1990s.

Among the comparisons is the development of the transportation system from Shinjuku Station West Exit Plaza completed by Junzo Sakakura in the 1960s, to the growth of residential areas on sites on the city's outskirts with links to Tokyo's main loop line, Yamanote Line. 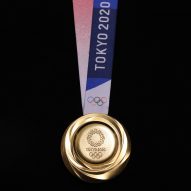 Other transformations include the adaptation of the stripped-back capsule lifestyle born in the 1970s with Kisho Kurokawa's Nakagin Capsule Tower, into hotels that provide fashionable accommodation for tourists.

The exhibit also suggests that today residence are more likely to be adapted from existing structures, instead of new buildings created post-war.

Tsukamoto and Kaijima have laid models, photos, drawings and posters across three rooms in the Japan Society. Oval volumes are installed inside the space to contain elements associated with the 202o, while items illustrating 1964 are arranged on the outskirts.

The Tokyo 2020 Olympics will take place next year from 24 July to 9 August. A number of designs have been created in preparation of the event including the 2020 Olympic torch, which was designed by Tokujin Yoshioka to resemble a Sakura cherry blossom, the traditional flower of Japan.

Earlier this year, the Olympic committee revealed that the 2020 medals will be made from old electronic devices donated by the public.