Japanese auto brand Suzuki has debuted a pair of retro-styled concept cars at Tokyo Motor Show 2019, including a driverless "mobile room" and a hybrid electric coupe with cameras in place of wing mirrors.

Suzuki's latest concept cars both fall under the umbrella name of "waku waku" – a Japanese onomatopoeic phrase used to express the feeling of excitement.

With electric and autonomous capabilities, the Hanare and Waku Spo concepts have made their debut at this year's edition of the Tokyo Motor Show, which is being held from 24 October to 4 November.

Sharing a similar aesthetic to traditional camper vans, the Hanare concept car boasts a symmetrical design, with no steering wheel or driver's seat, allowing it to be driven from the front or the back.

Named after the Japanese word hanare, which translates as "a detached cottage", the concept is described by the brand as an "autonomous mobile room."

A large gull-wing door that spans from one end of the vehicle to the other opens upwards to reveal a spacious interior featuring an interactive screen.

The living room-like aesthetic is heightened by two movable seating areas that curve around the shape of the vehicle at each end, upholstered with materials in retro shades of orange and mustard yellow. 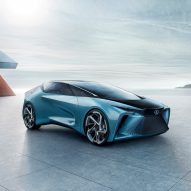 "Even in the face of an automated and efficiency-centric future based on advanced robotics and AI (artificial intelligence), Hanare prioritises human values of 'personal connection' and 'personal preferences'," said Suzuki.

The auto brand's second concept is a two-door, plug-in hybrid electric coupe called the Waku Spo, designed to offer families "fun and excitement across generations, for daily use as well as for pleasure".

Retro-style hues of metallic moss-green and faded brown colour both the exterior and interior surfaces and furnishings, complimenting the car's nostalgic blocky design with rounded edges that closely resembles the late-1960s Suzuki Fronte.

Suzuki introduces elements of modern day technology to the old-fashioned design in the form of two rear-view cameras in place of wing mirrors.

Information about the vehicle is displayed on a digital dashboard that can be hidden away with an additional wooden panel.

While the Hanare and Waku Spo are only concepts for now, the company claims that the designs are a taster of things to come as it plans to develop products and technologies for "opening up a big future towards the next 100 years".

Featuring fluid lines and gull-wing doors, the battery electric vehicle concept is designed to visually represent the flow of energy that would take place inside the car as a result of its in-wheel electric motors, and embodies its vision for a future generation of electric vehicles.