Colombo and Serboli Architecture has used richly-hued paintwork to bring life to the previously charred interior of this apartment in Barcelona.

Klinker Apartment is set inside an art-nouveau building in Barcelona's El Born neighbourhood and serves as a holiday home for a family of four hailing from Coronado, California.

The mother, an interior designer, had initially planned to renovate the 75 square-metre apartment herself.

However, several months into the construction works, a large fire destroyed a majority of the new elements as well as a number of quirky historic details.

Locally-based Colombo and Serboli Architecture were thus called upon to carry out a budget-friendly renovation that focused on simple, aesthetic alterations – investments made during the first intervention meant the client could no longer afford to make major changes to the apartment's layout.

"They contacted us one year later from Coronado, having decided to refurbish [the apartment] once again – from a distance," said the practice.

"The challenge was to take the given spaces and make new sense of them, change the meaning and uses without moving walls, to make a new interpretation of the spaces."

After completely stripping back and repairing surfaces that had been blackened by the flames, the practice has used colour-blocking to delineate different living spaces.

Terracotta-orange paint has been applied across the dropped ceiling, splashback, cabinetry and central breakfast island in the kitchen.

The same shade of micro cement has then been applied to a strip of flooring that runs directly underneath, contrasting against surrounding patterned tiles that were saved from the previous fit-out.

Orange also covers every surface in the study, which has been created within a narrow recess in the wall. 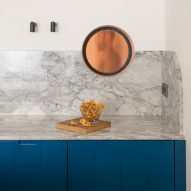 A bespoke L-shaped desk has been slotted into the corner, directly underneath a new porthole window that lets natural light into the space.

Inhabitants can also switch on a spherical pendant lamp that dangles down from the roof through curved cut-outs in the shelves on the wall.

Deep-purple paint was selected to coat the ceiling of the living area, where some ornate plasterwork has also been restored. The lower half of the room's walls are painted sandy-beige, forming what the practice describes as an "artificial horizon".

"It visually widens spaces, in an otherwise vertically proportioned property," the practice explained.

A sage-green border has been created around the master bedroom – which even envelops the headboard – and in the children's bedrooms, outlining storage cupboards where toys and other personal possessions can be stowed away.

A pale grey sofa from Spanish brand Kettal with a mustard-yellow frame, plum-coloured stool seats from Hay and leafy potted plants have also been dotted throughout the home to subtly introduce more colour.

The Klinker Apartment is one of several projects that Colombo and Serboli Architecture has completed in Barcelona. Back in 2018 it updated a flat to feature a host of colourful elements, including a baby-pink bathroom and floor-to-ceiling blue cabinetry.

Last year also saw the practice overhaul the home of its co-founder, Andrea Serboli. Meant to resemble a cabinet of curiosities, the home was completed with simple white walls against which Serboli could display mementos picked up on his travels.