The Growing Pavilion is a temporary events space at Dutch Design Week constructed with panels grown from mushroom mycelium supported on a timber frame.

Designed by set designer and artist Pascal Leboucq in collaboration with Erik Klarenbeek's studio Krown Design at Amsterdam studio Biobased Creations, the temporary pavilion is made entirely from bio-based materials.

The outer panels were grown from mushrooms, with the mycelium in the roots providing strength. These are covered with a coating that is a bio-based product originally developed by the Maya people in Mexico.

The panels were attached to a timber frame, and can be removed and repurposed as necessary. The floors are made from cattail – a type of reed – with interior and exterior benches made from agricultural waste.

"There are a lot of bio-based materials but they can be hard to recognise at first, and they often stay at sample stage," Leboucq told Dezeen. "I really wanted to make a bigger statement, so that a lot of people can discover this fantastic material."

"The idea of the Growing Pavilion started from the mushrooms, but it became bigger. Everything is built from plants and trees or agricultural waste," he continued.

Leboucq began working with bio-based materials three years ago, after meeting Klarenbeek for a project.

"I met Eric Klarenbeek and at that time mycelium was very closely connected with him. I asked him to work together in taking the material to the next step so that you could make spaces out of it," he said.

"What I really like is that mycelium is very organic and natural, but you can really use it as a designing product. It's very easy to shape into furniture, for example. This combination of the two was magic for me."

The resulting drum-shaped pavilion was installed at Ketelhuisplein during last week's Dutch Design Week in Eindhoven.

The structure is still in the experimental stage but the team are currently working towards panels and an eventual pavilion that will last outdoors for a few years, or even longer.

The mycelium panels are very light, and according to Leboucq they are well-insulated in terms of temperature and sound. Each panel can be repaired or reused elsewhere once the structure is taken down.

Although the waterproof coating is from Mexico, Leboucq argues that it's sometimes better to work with a natural product that isn't local and has to be imported, than to work with a polluting synthetic product made closer to home.

Leboucq is a member of creative storytelling platform Company New Heroes and worked with them on a schedule of events at the space during the design week, to engage visitors with the potential of the materials. 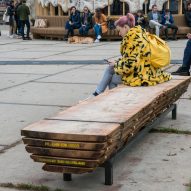 Musician Jacqueline Hamelink ran a project called Growing Music. Each day, a live concert of music by JS Bach took place. After each performance, the sounds were merged together to build a soundscape that was played in the pavilion.

The mushrooms growing in the panel frames were harvested every day at 3pm in front of an audience, with the produce cooked and available to purchase from a food truck that was located on Ketelhuisplein.

Benches created by Atelier NL from trees felled in the storm that hit Eindhoven in June this year were also dotted around the area, offering visitors a place to sit.

Other bio-based products created by designers were displayed in the space. These included Manureality, a collection of furniture made from horse manure by Martijn Straatman, and Living Skin by Aniela Hoitink – clothes made from materials such as mycelium, kombucha and algae.

An atlas of materials and the companies was available to designers and members of the public who visited and were interested in finding out more about bio-based materials.

"If you want to make a change, you should make the information open source," argued Leboucq. "People sit on it and try to protect the information, which I understand because a lot of designers are small companies working really hard seven days a week to run their businesses, but if you work together it goes much faster."