Atelier NL has made a series of wooden benches from trees uprooted in a huge storm that hit Eindhoven earlier this year, to sit alongside objects made from wood at their studio.

The Stormwood benches are made from timber slats cut from some of the nearly 1,000 trees felled during the storm that wrecked havoc across Eindhoven in June this year.

The studio cut the tree trunks in half lengthways, then sliced these again to make long planks. The resulting timber lengths were stacked, with wooden pegs creating a a small space between them to allow the wood to dry out.

The end of each bench is printed with a unique number that identifies where it used to stand in the city.

Visitors to the Wildhout website can type in this number to learn more about the particular tree, as well as to access an interactive map that shows what has happened to other trees that came down in the storm.

For example, a number of benches are made from a particular oak that fell in the Lievendaal district in west Eindhoven.

The series of benches are installed at Ketelhuisplein in the Strijp-S area, where many of the Dutch Design Week exhibitions are open to visitors this week. Once dry, the planks will be repurposed in due course.

Several of the benches are located in and around the Biobasecamp designed by Marco Vermeulen. The Rotterdam-based architect argued in a talk with Dezeen over the weekend that the shortfall in homes in the Netherlands could be met by building with timber taken from the country's 140,000 hectacres of harvestable woodland.

Atelier NL has also flanked the entrance to their studio in a converted chapel in the city with a pair of the benches.

Studio founders Nadine Sterk and Lonny van Ryswyck intend the seats to spark a discussion about the management of forests, how we might want our cities to look and the importance of trees for storing carbon dioxide.

Visitors to their studio during Dutch Design Week walk through a forest of saplings that fill the main space, as part of an exhibition called Wildhout, Dutch for wild wood. Further benches have been placed amongst these trees. 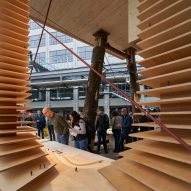 As they walk through, visitors can listen to an audio tour. It features a variety of speakers talking about their favourite trees, as well as reminiscing about the storm.

They can also adopt a sapling that will be planted in the place of one of the fallen trees for 10 euros. For each tree adopted, the city of Eindhoven will plant two more.

Work by designers Timm Doncke, Tamara Orjola and Lex Pott, all of whom work with wood, can be viewed elsewhere in the studio.

Doncke presents a radical and ambitious plan to reforest the Netherlands by 2060 in order to create a eco-friendly, tree-based society in his work Houtland.

Pine needles from European forests form the basis for Forest Wool by Orjola, who created stools and carpets from the felt-like material.

Lex Potts is showing an updated version of the Dutch clog called Poplar. The designer has given the shoe a sleeker silhouette in a bid to show that the iconic footwear has a place in contemporary lives.

Upstairs in the studio's mezzanine there is a small exhibition of work by Design Academy Eindhoven students who worked with Sterk and van Ryswyck to create wooden products.

The students spent a day in the forest sitting with a maple tree, before cutting the tree down. Each took a part of the tree – from the sap to the leaves – and used it to make something.

Images are by Ruud Balk.