British-Israeli designer and architect Ron Arad has completed an office tower in Tel Aviv "inspired by an iceberg" with an angular glass exterior that widens in the middle.

Located in the Israeli city's Nahalat Yitsak neighbourhood, the ToHA tower comprises 28 floors that step out towards the middle of the building, and then back inwards before the rooftop.

"The building itself was inspired by an iceberg," Arad told Dezeen.

"The idea was to have minimal contact at the floor to create the smallest footprint ever, which meant the building had to grow towards the centre."

ToHA is elevated on three legs that support the building above an outdoor plaza on the ground floor.

"There was a desire to touch the earth with the smallest footprint so we could create a new park in the city even though there was no land for a park," said Arad.

Arad, who worked with local architect Avner Yashar of Yashar Architects on the project, has placed technical plant areas at the base, rather than on the roof so that this space can be used as a rooftop terrace.

The exterior of these lower levels is clad in Dekton, a man-made stone-like material by Spanish brand Cosentino.

The knitted design of Dekton provides ventilation as well as structure to ToHA. The material is also used inside as flooring, ceilings, interior walls and panelled coverings. 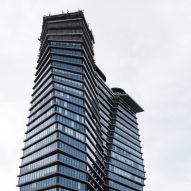 An entrance with a 30-metre-high atrium, planted trees and a skylight is incorporated into the office building, as well as a restaurant and various elevator lobbies.

The flexible floorplans are designed to be customisable depending on office tenants, and can contain either one company or be divided for up for seven tenants to share a floor.

ToHA is the first development on the site and a second 75-storey tower also underway.

The two buildings will be connected via an elevated walkway, and the taller will also be elevated on a slim support to maximise the open space on the ground floor.

The full Totseret Ha-Aretz (ToHA) scheme is set for completion in 2024, with the construction of the first portion was unveiled in June.

Once the latter tower is built it is expected to be Israel's tallest tower.

The current tallest building in the country is Azrieli Sarona Tower built by Moshe Tzur Architects, which is very close to Arad's ToHA in Tel Aviv's Sarona area.

Born in Tel Aviv in 1951 Arad is an architect and industrial designer based in London, who studied at Jerusalem's Bezalel Academy of Arts and Design and the Architectural Association in London.

Other new projects by Arad are a cancer centre in the north of Israel and a UK Holocaust memorial designed with David Adjaye.