Humans need to design a better future for the planet, and anger can be a good engine for that change, MoMA curator Paola Antonelli told the Dezeen Day audience.

It is important that humans make reparations for the damage that they have done to the planet and adjust our lives to be more responsible, said Antonelli during her Dezeen Day keynote.

"The future is not really terrifying," she said. "It just needs to be made better. Rather than angst, I wish we used anger."

We all have a role to play whether doing something very small, like picking up rubbish on the streets, or "flights of imagination" like Elon Musk's efforts to move to Mars, she explained.

Anger could be an engine for change

"The only way to live well is to be for others or amongst others," said Antonelli. "Anger could be a better engine to try and improve things in the future."

"I think that sense of action is what is needed."

During her talk at Dezeen Day, Antonelli spoke about the Broken Nature exhibition she curated for the Triennale di Milano this year, which Dezeen founder Marcus Fairs described in his introduction as "epoch-defining".

"I was part of a groundswell," said Antonelli. "This was just one of many exhibitions, many artist projects, designers enterprises that deal with being more responsible towards the planet, and the species."

"Being responsible doesn't mean only recycling"

As well as appealing to the design community the exhibition was intended to engage citizens with the issues facing the world in the climate crisis.

"We wanted to highlight the fact that being responsible doesn't mean only recycling, something that's well known to this audience but sometimes needs to be understood by the public at large," she said.

Antonelli is senior curator of architecture and design at MoMA in New York. She told Dezeen in an interview earlier this year that it is inevitable that humankind will cease to exist in the future.

Rather than trying to prevent our extinction we should instead design ourselves a "beautiful ending", she continued. Only then will the next dominant species on earth think of the human race with respect.

"It's not pessimistic, it's about thinking of our legacy," she said at Dezeen Day. "Pessimistic would be to be in denial, instead knowing it and doing something beautiful with it is the best."

"To be responsible you don't have to sacrifice sensuality"

The Milan Triennale exhibition, Broken Nature: Design Takes on Human Survival, brought together 120 architecture and design projects from the last 30 years that demonstrate this "crisis in our humanity".

"To be responsible you don't have to sacrifice sensuality, beauty, elegance, all of the different tropes that make design so interesting,"  said Antonelli today. "We really see in this exhibition that design can be responsible and beautiful at the same time." 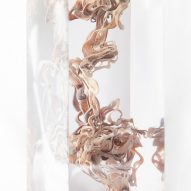 Each project explored the strands that connect human beings to nature that have been badly damaged, or permanently severed, in the anthropocene era – the period in which humans have become the dominant influence on the earth.

Neri Oxman – whose Mediated Matter Group won sustainable design of the year at the Dezeen Awards 2019 for Aguahoja – created a new commission for the exhibition, called Totems.

The Totem sculpture features flesh-coloured plumes, formed by injecting liquid melanin into intricate channels within a 3D-printed transparent brick. The brick was presented within a tall black totem.

Although currently on a small scale, the team hopes that the project will eventually see melanin – the pigment that produces human skin tone – applied to architecture.