Bi-national studio 1100 Architect has renovated a cottage in the Hamptons to create spaces where "old and new are impossible to distinguish from each other".

The House in Amagansett takes its name from the Long Island hamlet where it is situated. Nestled into grassy dunes, the 1,609-square-foot (150-square-metre) dwelling serve as a "quiet retreat away from the city – a place to cook, entertain, read, work and swim".

Designed by 1100 Architect – which has offices in New York and Frankfurt, Germany – the project is a renovation of a three-bedroom cottage dating to 1973. The dwelling's interior layout was reconfigured to suit contemporary needs and to improve energy performance.

"We carefully studied the original dune cottage – designed by Harry Bates in the mid 1970s – and adapted its DNA to make a contemporary living environment, such that old and new are impossible to distinguish from each other," said Juergen Riehm, a founding principal at 1100 Architect.

The interior was made more open, allowing for a clear sight line through the house and into the surrounding terrain. Large sliding doors usher in daylight and facilitate natural ventilation, in turn helping reduce energy consumption. 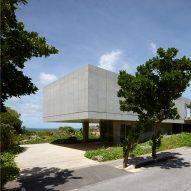 In one of the bedrooms, a sliding door was added, enabling it to flow into the main living area. The room now serves as a guest room, a study, or an extension of the public zone, depending upon the owner's needs.

The cottage is fitted with simple finishes, such as white cabinetry and wooden flooring. Rooms are sparsely furnished with contemporary decor, such as plush leather sofas and a marble-topped coffee table.

Original elements were restored where possible, including a series of linear skylights in the public zone. The home's cedar siding was also refurbished, as were wooden terraces and a fence that surrounds them.

Just outside of the living room, the team added a slender, concrete swimming pool and a wooden deck, enabling the owners to easily cool off during the warm summer months.

Founded in 1983, 1100 Architect has a diverse portfolio of projects, ranging from office and cultural buildings to single-family homes.

Other work by the studio includes a concrete holiday home on a Japanese island, which was designed to provide optimal views of the sea, and a student centre at the University of Pennsylvania that consists of a renovated historic cottage and an angular addition.

Photography is by Nikolas Koenig.