Paintings and sculptures collected by the late Mexican architect Luis Barragán are showcased on a stepped wooden platform at his Mexico City house.

Located in the former studio of the property, the structure is highly geometric and symmetrical, with four stepped volumes that act as shelves.

"The immersive and overwhelming quality of the exhibition results in a phenomenological experience informed by light and colour, similar to the one experienced by the thousands of visitors that make their yearly pilgrimage to this iconic house," said the team.

"Our intention was to create a setting that allows the viewer at all times, and from all angles, to see the pieces from sides that have never been accessible to the public, providing a new reading of the work as a constellation," it added.

Completed in 1948, the Mexican architect's joint home and studio has been run as a cultural and artistic platform by Estancia Femsa for the past four years. The organisation enlisted AGO Projects and Sala Hars to design the installation to showcase Barragán's collected paintings, sculptures, artefacts and ceramics from a range of time periods.

Comprising four sets of steps that lead to a stack of smaller volumes, Alter Shelf was designed to draw on forms found in Barragán's projects.

"The result is a piece that pays subtle homage to the architect's broad ideas and inspirations – from the famous floating stair to the religious imagery within the house," the team said. 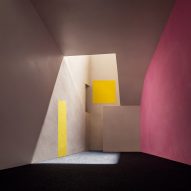 "No architect today is capable of buildings like Luis Barragán's"

Artwork is arranged in no particular order, and the fusion contrasts the rigid, mathematical form of the Alter Shelf structure. Additional paintings are also hung on the walls of the studio.

Born in 1902 in Guadalajara, Barragán was an engineer and architect whose work focused on bold colours, geometry and light. He was a devout Catholic, music lover and art collector.

He died in 1988, eight years after he was awarded the Pritzker Prize, the highest award in architecture.

Created to accompany his residence, Barragán's studio has two doors; one accesses a rear courtyard with a water fountain while the other leads to the front entrance. A large square window is placed high up and is accented by a large golden canvas that reflects sunlight.

Casa Barragán, which was declared a UNESCO World Heritage Site in 2004, is among a number of buildings that he completed in Mexico City. Examples include Casa Gilardi with blue, yellow and red walls, a chapel with gold panels at the convent Capilla de las Capuchinas Sacramentarias, and a renovated pink house Casa Prieto Lopez.

The installation at Casa Barragán forms part of the show Emissaries for Things Abandoned by Gods, curated by Elena Filipovic, in which the rest of the rooms in the home is filled with work by contemporary artists from around the world.

Alter Shelf is on view from 21 September to 15 December 2019 in the house located at 12-14 General Francisco Ramírez.

AGO Projects is led by Rudy F Weissenberg and Rodman Primack and has offices in New York and Mexico City. Design studio Sala Hars is also based in the Mexican capital and founded by Douglas Harsevoort and Juan Sala.

Photography is by Rudy F Weissenberg.