The sensual and autobiographical qualities of the house Mexican architect Luis Barragán built for himself are rarely found in today's buildings, says Aaron Betsky.

If you are going to make real architecture today it better be damn real. In a world of instant images whose truth you can never ascertain, delicate structures just won't do. You need something that will convince and persuade, stand and deliver.

While you can make such forms by engaging in all kinds of acrobatics (cantilevers and off-kilter, stacked boxes), or by making super clean and empty boxes for super thin and the empty-brained, you can also achieve a sense of here- and now-ness by heightening the effect of every element, every detail, and every surface to the point that the building stands as refutation of the evanescence of our society.

But how? A recent visit to see Luis Barragán's House and Studio in Mexico City, Casa Barragán, reminded me of the power of pieces over whole, effect over means, and the beauty of what Robert Venturi called "the difficult whole". It also made me realise that I can think of no single architect working today who is capable of such architecture. Does that mean it cannot be done? I certainly hope not.

The architecture of the difficult whole (let's call it ADW, as opposed to either ADD or the so-fashionable OOO, or Object Oriented Ontology) lacks a certain set of qualities. The first is appearance. Walk up to Barragán's structure and you will find a stucco-covered wall, or rather several of them, that have no particular focus, rhythm, or pretention.

Casa Barragán's lack of presentation is striking. ADW buildings aren't usually this lackadaisical – the facades of Adolf Loos, for instance, work very hard to appear to be a mess. In this case, the facade is the result of a growth over time of the complex, as well as the narrowness of the street.

The second characteristic of ADW is a lack of monumentality or even impressive massing. Again, the Casa Barragán is an extreme example and, again, the blame for much of this lies in the fact that the house – which Barragán started to build in 1948 and worked on for the next few decades – kept evolving right up to his death, to encompass both his changing perceptions of its spaces and his business.

Some of my favourite buildings, however, share an inability to be "good" in a traditional way in how they impress you with their size, importance, and erudition. Think, for instance of the rambling work of Eliel Saarinen or HP Berlage or, more recently, that of Frank Gehry or even David Chipperfield's best work.

Third, ADW does not do good plan. One of the secret pleasures of architecture nerds is the beauty of a plan that not only lets you envision how the spaces follow one another, but also contain jokes of geometry and composition akin to the most arcane JS Bach partitas. Here, Venturi himself was a master at such plan games. Barragán will have none of this. His plans are resolutely boring.

Finally, ADW consists not just of floors, walls, and ceilings, but includes the furniture and furnishings, as well as the art in the house. In Casa Barragán, the effect of the large living room has as much to do with the movable partitions and the oversized furniture, but also with Mathias Goeritz's paintings of solid gold leaf, as it does with the scale and proportions of the room.

In a world of instant images, delicate structures just won't do

This is even more true in the smaller spaces, where moving a small shutter to flood a bedroom with light, or how the placement of a table turns the whole room into a pinwheel of masses, can take your breath away.

Then, there is the garden, which Barragán invites in with windows both huge and tiny, allowing it to sneak into the territory of the human-made to overwhelm, and yet somehow strengthen the solid walls, cross-mullioned windows, and straight-backed chairs.

The result of all this difficulty is to make the simple things come out. The floor in the house's foyer, its volcanic stone burnished to a sheen that removes it from the rough-hewn role of sculpture it plays just outside the window; the light bouncing off coloured planes to suffuse a space with pink and yellow mists; the gold paintings casting back that glow as a geometric whole; the staircase, just planes of ascension to the private realm cantilevered off the wall; the mark of the body on the treads or the chairs, their smoothness telling a story of occupation within what could be empty grandeur. All of that focuses not just your eyes, but your whole body on the particularity of these moments in time and space. 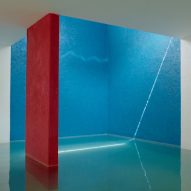 The result is a profound sense, at least for me, of queerness. The Casa Barragán is too sensual to be the home of a monk, and to peculiar to be the house inhabited by a nuclear family, or even a man secure in his place in the world.

Whether or not the architect was queer (he never married, claiming he would be forever in love with a woman who died in a car crash, but was certainly part of a gay circle), I would argue that ADW is queer in a broader sense. It composes moments of belonging – anchors, if you will – but also places of occlusion – closets – within an environment that keeps slipping away from any attempt to make sense of it as a whole or to category. It queers architecture.

Perhaps this is why it is difficult to find such architecture today. There are certainly architects who have moments of such strangeness combined with a fetishism about materials, light, and details – Peter Zumthor comes to mind – but few who pursue such work with such skill, idiosyncrasy, and rigour.

We can construct our social identities through architecture

What we need from our real world is a reminder that we ourselves are the ultimate difficult wholes, sensuous and confused, but very real, and that we need to find ways to find ourselves reflected and at home in a wider, equally difficult, world. We can construct our social identities through architecture.

ADW at its best is therefore autobiographical. It is rare to find examples where architects have succeeded in extending their talents in this area to other clients, let alone the public. The Brion Cemetery or Loos' Villa Muller are examples of the latter, and perhaps some of Josep Plecnik's work exhibits it too.

In the contemporary world, the closest I can think of in this sense are the house Jose Oubrerie spent decades building outside of Louisville, Kentucky, and which now stand abandoned, or Amateur Architecture's campus of the China Academy of Art in Hangzhou.

None of such work comes close to ethereal solidity, the crafted incompleteness, and the sheer challenging beauty you will find in the Casa Barragán. I took my students from the School of Architecture at Taliesin there to look and learn. Perhaps someday one or more of them will find a way to continue and refresh the "difficult whole".