This collection of lamps by New York designer Merve Kahraman takes cues from the forms and patterns of the planet Saturn.

The Cassini collection is named after the Cassini–Huygens outer space mission, which was launched in 1997 by NASA, the European Space Agency and the Italian Space Agency to study the planetary system of Saturn.

"Cassini-Huygens has been described as a 'mission of firsts', that has revolutionised human understanding of the Saturn system, including its moons and rings, and our understanding of where life might be found in the Solar System," Kahraman said.

The designer used a mix of materials including wooden rattan, metal and glass to create floor lamps and sconces that mimic the appearance of Saturn and its systems.

Flat wooden rattan saucers were formed to resemble the shape of the gaseous planet's notorious rings. In the designs, the discs wrap opaque white glass spheres that are capped with black- or gold-painted metal tops.

"Opaque white glass spheres add a soft touch to the lamp when lit and glow like Titan, Saturn's largest moon," the designer said.

The iridescent black and gold paint that coats the piece of rounded metal also changes colour when viewed from different angles.

For one of the floor lamps the rattan rings are painted black to match a glossy black top and stand. Paler rattan is paired with wooden rims and golden tops. 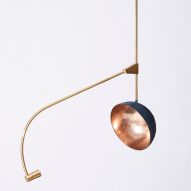 Other details of the designs are curving stands and looping arms, which are painted either black and green. These extend in a loop to hold up the wall lights.

For the standing version, these structures from a curving shape that turn the lights to face upwards. Cone-like bases made from marbled stone anchor the standing lamps to the floor.

Merve Kahraman is an interior and industrial designer who practices in New York and Istanbul.

Kahraman's exploration of planetary forms follows other artists who have experimented with creations reminiscent of celestial beings.

Examples include the arm and bulb of Jesse Ede's Orbit light, which rotate to mimic the trajectory of moons and planets, while the Since the World is Round collection by Lara Bohinc was influenced by the shapes and motions of planets.