Orbit, as its name suggests, is inspired by the trajectory of a moon around a planet. This continues Ede's lunar-themed series, which began with the Lunar table and bench in early 2017.

The light is made from solid brass, with a arm and bulb that can move in a full 360-degree rotation around the central cast-bronze dome.

"The swing arm and light rotates around the planetary dome to illuminate it from any angle you choose," explained Ede to Dezeen.

"A golden glow is reflected when lighting the inside and brilliant blue when lighting the outside," Ede continued. "This highlights the contrast between the smooth polished inner and rough patinated planetary outer surface."

According to the designer the dome creates a "waxing and waning shadow" on the ceiling above the light, creating an ever-changing cinematic experience.

Ede says he is drawn to organic materials and natural finishes and his work illuminates a contrast between the raw material and the man-made processes that shape them into design objects.

The Orbit light is an evolution of Ede's previous light, the Eclipse, which was formed from blackened steel, Malmesbury slate stone and sand cast aluminium. 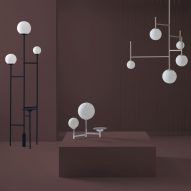 Just as in Orbit, Eclipse incorporates a rotating arm that allows the user to change the atmosphere created by the light without disrupting its glow. To achieve this both lights contain a custom engineered slip ring made from a solid billet of brass that allows the arm to infinitely orbit without tangling any wires.

Ede is a member of the Southern Guild collective of designers in South Africa, alongside Porky Hefer.

The Orbit light is on display at the Southern Guild gallery until 12 September 2018 as part of the group exhibition Colour Field.