Dezeen promotion: Dezeen readers can get a discounted rate to Salon Art + Design fair in New York, which will feature designs by Frank Lloyd Wright and Pierre Yovanovitch.

Organised by Sanford L Smith + Associates, the eighth edition of Salon Art + Design will take place in the Park Avenue Armory on Manhattan's Upper East Side from 14 to 18 November.

Sixty studios and galleries will showcase a mix of contemporary and mid-century collectable art and design at this year's event.

"We hear so much about divisions between art and design these days, both aesthetically and commercially," said Jill Bokor, executive director of Salon. "One of the reasons for Salon's success is that we don't make these distinctions."

"Salon has always encouraged inclusion and diversity in the cauldron of what collectors buy and the way people live," she said. "We're also trying to push the way people think about the boundaries of collectable design."

Among mid-century designs are works by celebrated American architect Frank Lloyd Wright, which will be presented by Bernard Goldberg Fine Art, and creations by Japanese-American woodworker George Nakashima shown by Moderne.

Contemporary displays will be provided by New York galleries Friedman Benda and The Future Perfect, and London's David Gill Gallery. Another British company, WonderGlass, has commissioned artists to create glass objects for this event. 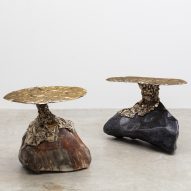 US lighting studio Apparatus will also showcase furniture and lighting from Interlude, which it launched during Milan design week earlier this year.

In total, Salon Art + Design will show works from 13 countries. Highlights include the inaugural showcases by Moscow and São Paulo galleries, and a pop-up gallery from Lebanon.

Historic rooms within the brickwork Armory building, which is a hallmark of the Gilded Age, will host site-specific installations created by Mathieu Lehanneur, furniture maker Frank Pollaro, and Lalique and British wall company Fromental.

Dezeen is media partner for Salon Art + Design for the third year running. This year, Dezeen readers can redeem 20 per cent off ticket prices by entering the discount code 19DEZPAR.