The founders of American studio Turkel Design have used prefabricated components to create a home for themselves in southern California that will also serve as a "lab" for testing ideas and materials.

The Axiom Desert House is located on a quiet site in Palm Springs and looks toward the San Jacinto mountains to the west. The low-lying dwelling recalls the mid-century modern architecture found throughout the storied desert city.

Designed to be "simple, elegant and replicable", the home serves as the private residence of Joel and Meelena Turkel, founders of Boston-based Turkel Design. Founded in 2008, the studio specialises in creating upscale homes using prefabricated elements.

The Turkels purchased the Palm Springs property several years ago and set out to create a new home for their family that capitalises on the region's sunny climate and allows for indoor-outdoor living.

The residence is also intended to serve as a living lab that enables the Turkels to test out new materials and processes – and "to turn the lens on themselves as both designers and clients".

To fabricate and outfit the home, the couple teamed up with two dozen companies from around North America and Europe, ranging from lighting and furniture suppliers to a living wall designer.

"This home has been designed to exist as a hybrid of learning, living and collaboration," the studio said.

L-shaped in plan, the 2,080-square-foot (193-square-metre) home is composed of rectilinear volumes that are organised around a swimming pool. The house's design was pre-existing and was then customised for the site.

The home features a post-and-beam structure and prefabricated wall panels. All framing and sheathings material are made of engineered wood. For the facades, the team used stucco, concrete block and thermally modified birch. 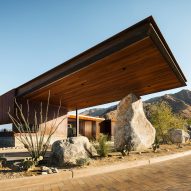 Inside, there are distinct zones for living, sleeping and working. The master suite lines one side of the house, while a den and kid's bedroom occupy the other. At the centre of the plan is an office and open-plan public zone.

The great room features a verdant living wall and a 12-foot (3.6-metre) ceiling with clerestories. Glazed pocket doors enable the public space to flow into the backyard, diminishing the boundary between inside and out.

The connection to the exterior is further enhanced by a seating element referred to as the Living Platform. Adorned with cushions, the platform stretches from the living room to a rear patio, and is divided by pocket doors that can easily open up.

"This platform is both part of the living room, as well as part of the pool area," the designers said. "It is deep enough that it can accommodate several people permitting all kinds of activities – from arts and crafts to poolside meals."

The furniture in the home is "transformable" to accommodate the family's changing needs. Storage has been incorporated throughout the dwelling in a way that maximises space and minimises visual clutter.

"Placed at the periphery of each room, the built-in storage functions as an added buffer between spaces, while being strategically located where it's needed," the studio said.

The designers aimed to use more sustainable materials throughout the dwelling, including thermally treated ash for ceilings and engineered poplar for cabinetry.

Double-pane windows were strategically placed in order to mitigate solar heat gain during the hot summer months, while still capturing views of the mountains and ushering in natural light.

Designed to be a net-zero-energy building, the home has rooftop photovoltaic panels that generate power. The designers said the residence consumes no fossil fuels, with the exception of a barbecue grill that uses propane.

The Axiom Desert House was featured during the Palm Springs Modernism Week last February, and will be showcased again next year.

Other recent projects Palm Springs include a neighbourhood guardhouse by Studio AR+D that is clad in weathering steel, and the renovation of a dome-shaped house that was overseen by its owner, Los Angeles architect Pavlina Williams.