Central Saint Martins fashion student Benjamin Benmoyal drew on his years in the Israeli army to design this collection of "utopian" garments, hand-woven from fabrics made of recycled cassette tapes.

The fashion collection, called It Was Better Tomorrow, comprises a range of structural garments patterned with colourful stripes and complete with boxy wigs, all boasting an iridescent sheen thanks to their unconventional material.

Benmoyal hand-weaved the tape from discarded video and cassette tapes with recycled yarns and Tencel – a fibre made from wood pulp – on a loom to create the fabrics.

He based the collection's colour palette on the vibrant works of artists such as James Turrell and Olafur Eliasson, as well as the bright colours he saw when travelling across Iceland.

He also took design cues from brutalist architecture located across his hometown of Paris to achieve a "utopian and optimistic visual concept", including Les Espaces d'Abraxas, Picasso's Arenas, the Cretan Cabbage buildings and the Organs of Flanders.

This informed the structural shapes that each of the garments take, including wide, flared trousers, protruding collars in geometric shapes and boxy shoulder-pads.

It Was Better Tomorrow was built on Benmoyal's desire to feel "less pessimistic about our world" after his time spent in the army working as a commando paratrooper.

"After high school I was completely lost in my life, I failed many things and needed to prove to myself I could do something that would push me, physically and mentally, to the limits," Benmoyal told Dezeen. 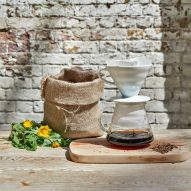 "I am French and Israeli, and in our country the military service is obligatory at around 18 years old," he continued. "That's why, when I was called for military service, I applied to the commando paratroopers."

"However after this I felt kind of depressed about our world, so when I started my course at Central Saint Martins (CSM) I naturally based my work not on the army, but rather on how to feel better after this," the designer added.

Benmoyal became interested in recreating a vision of the future based on the projected image of the life people led during the late 1960s and 70s, using the designs, architecture and films of that era.

"This time seemed very optimistic, whereas nowadays we tend to think that the future will be bad or that it won't even exist," the designer explained.

"This is how I found inspiration in the shapes of brutalist architecture from the '60s and '70s for my designs, as these symbolised a utopian future," he added.

This utopian vision of recreating the past also informed his use of old video and cassette tapes as a repurposed material.

"Many people and companies wanted to get rid of the tapes, as the digital age has made them useless," said Benmoyal.

"I feel that using VHS (video) tapes from my favourite childhood Disney movies ties to this nostalgic idea of my lost naivety – recovering the tapes into something new," he added.

Pieces of the fashion collection were showcased as part of the Designing in Turbulent Times exhibition by CSM in London, which brought together a series of design propositions for a more sustainable future.

Also featured in the exhibition was a project by graduate Daisy Newdick, who presented her method of making dandelion coffee from scratch with a handmade roaster to demonstrate that consumers can brew the beverage in their own homes.

Newdick wanted to use her project to highlight the overlooked qualities of the common dandelion plant in a bid to encourage biodiversity in the UK.