BIG has completed a circular enclosure at a zoo in Denmark to house two giant pandas that have been relocated from Chengdu, China.

Built at the heart of Copenhagen Zoo, Panda House has been designed by BIG in collaboration with Schønherr Landscape Architects, MOE and a number of zoologists to mimic the bears' ideal natural habitat.

Its form evokes the Chinese yin-yang symbol, providing separate areas for the male and female bear so that they can't see, hear or even smell each other until mating season.

"We studied the social and behavioural needs of the giant pandas, apart from mating season, pandas are loners by nature – male and female pandas need to be separated from each other," explained BIG partner David Zahle.

"Taking the literal interpretation of the yin and yang symbol, we divided the circular site to create separate yet harmonious homes for the male and female pandas, which can be flexibly merged during dating season."

The pandas, named Mao Sun and Xing Er, were a gift from the Chinese government to the Queen of Denmark's following her visit to the country in 2014.

BIG, Schønherr Landscape Architects, MOE were later commissioned to design the 4,950-square-metre enclosure for the bears to reside at Copenhagen Zoo, for which they first unveiled the design in 2017.

Like the yin-yang symbol, which represents opposite but balanced forces within a circle, Panda House is divided by a curving wall. This snakes upwards at opposite ends of the enclosure to create an undulating landscape.

This slope is used to create a mix of different environments for the pandas, including "a bamboo forest" on the elevated side, and a "more dense 'misty' forest" on the other. This is mirrored either side of the wall.

Under the raised edges, BIG has also incorporated sheltered stables for the pandas to hide, while a variety of rocks, climbing trees, basins and streams fill the rest of the space.

Together this provides the pandas with plenty of opportunity to rest, explore, eat and find shade and sun depending on the season, temperature and preference. 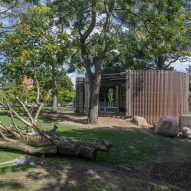 "Overall, the Panda House is designed to feel like humans are the visitors in the pandas' home, rather than pandas being the exotic guests from faraway lands," said Zahle.

A ramp runs around its edge, in line with changing wall heights, and allows people to observe the pandas from different levels.

Where the land is raised, the ramp offers guests an open-air viewing platform in line with the bamboo forest, while at ground level it opens out into an indoor observation area lined with glass.

To offer a more immersive experience, here BIG has also incorporated a French-Asian bistro for visitors so that they can dine in line with the lush landscape.

"Architecture is like portraiture. To design a home for someone is like capturing their essence, their character and their personality in built form," concluded BIG founder Bjarke Ingels. "In the case of the two great pandas, their unique solitary nature requires two similar but separate habitats."

"The curvy lines are undulating in section to create the necessary separation between him and her – as well as between them and us," he said.

"Located at the heart of the park, we have made the entire enclosure accessible from 360 degrees, turning the two pandas into the new rotation point for Copenhagen Zoo."

BIG is an architecture practice founded by Danish architect Ingels in 2005, and has studios in Copenhagen, New York, London and Barcelona.

Other recent projects by the studio include a twisting art gallery that bridges river in Norway and the Copenhill power plant in Copenhagen that is topped by a rooftop ski slope.

Photography is by Rasmus Hjortshøj of COAST.