Seven installations lit up Oslo's harbour promenade for the inaugural Fjord Oslo light festival, each showing the effect that light can have on our emotions.

In celebration of Oslo as European Green Capital of the year, all projects made use of light through a variety of approaches and technologies, to help visitors see their surroundings in a new way.

Lysyntese by Hungarian artist Laszlo Bordos is one of two installations that were commissioned especially for the festival that took place last weekend, and saw the facade of Oslo's city hall turned into a canvas for a series of projections.

These centre on the process of photosynthesis which, through the medium of light, forms the very basis of life on earth.

"If light is so important for our biologic existence, then light art is similarly important to our spiritual existence," Bordos explained. "It affects people in many non-physical ways: emotional, psychological, intellectual."

In the hopes of harnessing this effect, Bordos used architectural projection mapping to overlay 3D animations onto the building's exterior.

This involves using a laser to scan the building's exterior in order to create a virtual 3D model, which in turn allows Bordos to digitally render his animations to respond to the shape of the actual building.

The surrounding lighting design was developed in sync with this, in order to amplify the experience with programmable lights and stroboscopes.

The final display was also audio reactive, moving in time with the soundtrack created for the occasion by Sarah Badr of FRKTL.

The second piece which made its debut as part of the festival is Ligh3ence, created by Norwegian lighting designer Silje Thorsager Østby.

Using illuminated frames, she set out to recreate the natural phenomenon of "mountain spectres" on a hill in Oslo's Kontraskjæret park. 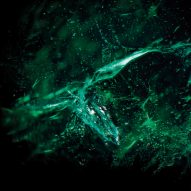 This optical illusion sees shadows that are cast in the mist surrounding a mountain appear as hazy, larger-than-life shapes in the distance, surrounded by circular rainbow refractions.

In Østby's version, this is achieved through an arch that emit light in different colours and which visitors are free to pass through and interact with.

Through strategic lighting, the fog which would otherwise disappear in the night, comes to light as an architectural element.

In order to keep the festival as sustainable as possible, all installations were powered using the city's existing power grid.

"It was important to us to use grid power, and not diesel generators, which are often used in other festivals."

Meanwhile, staging the exhibition outdoors was a bid to get visitors closer to nature while democratising access.

"Fjord Oslo was founded with a wish to create a positive, inclusive, social and open cultural event for everyone in the city of Oslo," Isachsen explained.

Other stand-out projects from the festival include Constellations, in which light is projected onto otherwise invisible water particles to take visitors on a journey through the universe, as well as Private Moon, a travelling installation that tells the love story between a man and the moon.

Earlier this year, the London Design Festival also featured a number of light installations in its programme, including Dan Tobin Smith's Void, for which he blew up gemstones to 60 times their size, and Lee Broom's immersive hall of mirrors called Kaleidoscopia.

Photography is by Goodiebag unless otherwise stated.