Luxury carmaker Aston Martin has unveiled its first-ever motorcycle, which features a 180-horsepower turbocharged V-twin engine housed inside a carbon-fibre body, and is only legal for track use.

Developed in partnership with English motorcycle brand Brough Superior, only 100 models of the limited edition AMB 001 bikes will be made.

The motorcycle is designed for track-use only, boasting a 997-cc V-twin engine with a turbo-charged output of 180-horsepower. A variable geometry turbocharger further boosts power and and an intercooler prevents overheating.

The AMB 001 takes design cues from Aston Martin cars, featuring a soft, sculptural body with a carbon-fibre "fin" based on the design of the side strakes found on the brand's vehicles.

Coated with Aston Martin's Stirling Green shade, this fin forms the main seating part of the motorbike, running along the full length of the tank, passing under the saddle and out onto the rear to create a "flowing form" along the top of the vehicle.

The AMB 001 also features aerodynamic wings attached to the cowl – the base of the windshield – on the front of the bike, which are the same nine-micron stainless-steel wings found on the Aston Martin Valkyrie car.

A hand-stitched saddle comprised of Oxford Tan leather pads sits on top of the fin, in a bid to combine old techniques with modern technology.

"This is what we believe a cutting-edge motorcycle should be and we are very proud to see the Aston Martin wings on a motorcycle for the first time," said Marek Reichman, executive vice president and chief creative officer of Aston Martin.

"In addition to applying the skills we have developed for cars such as the ground breaking Aston Martin Valkyrie, we have also been able to bring our special expertise in the traditional craft techniques to this project," he continued.

Each of the components have been made from carbon-fibre, titanium and billet aluminium, finished in the traditional Aston Martin racing colours of Stirling Green and Lime Essence with matte black wheels, forks and brake assemblies.

This includes the chassis configuration with a double wishbone front-fork, and the exhaust, which is made from Inconel – a superalloy favoured for its thermal and mechanical properties. 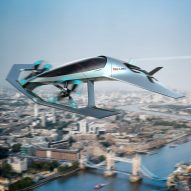 The AMB 001 made its debut yesterday at the EICMA motorcycle show in Milan, which is taking place in the Italian city until 10 November 2019.

Despite Aston Martin's British base, the motorcycle is being built and hand-assembled in the Brough Superior factory in Toulouse, France, with first deliveries set to roll out by the end of 2020.

The British car brand also recently ventured into aircraft design with its Volante Vision aircraft concept, which was debuted on 16 July 2018 at the Farnborough Air Show.

The flying autonomous, hybrid-electric vehicle is able to take off vertically, and embodies Aston Martin's aim to bring luxury private transport to the sky.