The Hand furniture collection is the culmination of a collaboration that saw the architecture and design studio headed by Mårten Claesson, Eero Koivisto and Ola Rune team up with Takahashi, who operates a workshop in Kumano, Hiroshima.

The project was initiated by creative director Teruhiro Yanagihara, who oversees the programme at Tokyo Craft Room – a guest room and gallery at Tokyo's Hamacho Hotel.

Under Yanagihara's directorship, different local and international designers are invited to collaborate with Japanese artisans on projects resulting in functional objects that are put to use in the room.

Following an overnight stay to understand the suite's scale and functional requirements, Rune visited Takahashi's workshop to learn more about the processes he uses to craft his exquisite wooden objects. 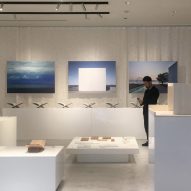 "During our first meeting, Takahashi-san started showing me some samples on his iPad," the designer recalled. "When we looked at the detailing I thought to myself, 'This is unreal. You can't do this, it's impossible to make a box or tray in this manner'."

"We wanted to do something that we hadn't done before and see how much we could challenge Takahashi-san," the designer continued. "When the audience see this product, we want them to understand how well it has been made."

The furniture collection features a seemingly simple combination of planar elements with rounded forms. However, on closer inspection it is noticeable that none of the surfaces are entirely flat and the cross section of every constituent part tapers towards its edges.

Takahashi and his skilled colleagues used hand tools to craft convex shapes that gradually reduce in thickness, starting from the centre, to an edge with a thickness of just a few millimetres.

Even the table surface has a slight camber that is hard to see but more noticeable to the touch. The legs and tops of the table, bench and stools are fixed together using traditional joinery techniques.

The Hand collection was unveiled at a launch event at Tokyo Craft Room, during the Designart Tokyo event.

The project represents a continuation of a long relationship between Claesson Koivisto Rune and Japan, which dates back to 1994 when the studio's founders visited the country on a research trip that resulted in its first architectural commission: Villa Wabi.

The studio has since expanded to become an internationally renowned multidisciplinary office working on projects ranging from buildings and interiors, to exhibition design, lighting, furniture and tableware.

Its previous projects include a series of objects made by Japanese artisans and based on a house it designed on a Swedish island, as well as a wooden chair it developed to show how quickly furniture can be translated from an initial design into production.