Bali-based architect Alexis Dornier has developed a concept for prefabricated homes that could easily be taken apart and reassembled in a new location.

Stilt Studios are small homes on stilts, which could be erected in a variety of different places without causing major damage to the landscape.

Dornier came up with the idea as an alternative to the current situation in Bali, where buildings are often constructed and then demolished shortly after, because sites are often let for short time periods.

"The reality here is that we often find leasehold plots with a limited amount of years," explained the German architect, who relocated to Bali in 2013.

"This situation calls for us to tread lightly through prefab 'PropTech' structures that could be packed up and re-erected someplace else," he told Dezeen.

"Someone could also put this unit into their garden and possibly start a little side business for themselves."

The first Stilt Studio to be constructed will be a studio for Dornier and his team. They plan to build it in the midst of woodland, where they can benefit from the shade of surrounding trees.

However, Dornier is keen to scale the project up. He is developing a series of different typologies and facades, all customisable in shape and material, so that the buildings can serve a range of uses. He also suggests that multiple units could be connected.

The current design is for steel frameworks, but the long-term ambition is for the structures to be built from cross-laminated timber (CLT), to make them more environmentally friendly.

"This technology that has been around for decades, but here in Indonesia it is not feasible due to the large amount of illegally harvested tropical wood polluting the market for innovation," said the architect.

Other sustainable features include large overhangs designed to minimise solar-heat gain, rainwater harvesting, cross ventilation and energy-generating solar panels. It is also envisaged that food could be grown underneath the buildings. 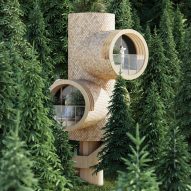 Dornier also recently completed a series of villas at idyllic surfing retreat, Uluwatu Surf Villas. He believes Stilt Studios could also tap into the growing market for tourism in Bali.

"Tourism in Bali is reaching its peak," he explained.

"In order to bring development into remote areas, to boost the economy on remote islands, we need knock-down structures that are fabricated offsite, and that can be erected in a minimum amount of time, without complex skillsets necessary," he continued.

"The experience of being off the ground evokes a sense of protectiveness, adventure and creates a framework for memories."