Dutch architect Chris Collaris has completed this property in Ontario, Canada using stone sourced from a nearby quarry, wood from the building site, and vegetation from surrounding fields for the green roof.

The low-lying House H is located among the rolling fields of Mount Brydges, a small municipality in Southern Ontario. This rural area is located in Canada's Great Lakes region, near the US border. Collaris designed the property for residents that run a plant nursery on the extensive plot of land and wanted to add a home that could be used by three generations of a growing family.

The stone, wood and plants form part of Collaris' intent to build the villa "with things which were pleasantly close".

Exterior walls and the floors inside the home are made with a stone called Eramosa, sourced from a nearby quarry in Wiarton, Ontario.

Different treatments were used for the floors and walls, giving them a different appearance. The dark, polished floors are cut in an irregular pattern, while the facade stones are a matte grey that Collaris chose to make the walls appear more solid.

"We cut it so you see the different gradient colour layers of the stone," he told Dezeen. "And again in different layers in height with seams in almost the same colour of the stone in order to get a more massive look of the facades."

The roof is covered with a thick soil mixture developed by the owners, and planted with vegetation from their nursery. According to Collaris, they used leftovers from their regular production. The edge of the overhanging rooftop is clad with greyed Douglas fir that matches the tone of the stone.

The expansive roof forms an overhang that shades exterior spaces from the hot summer weather, while keeping snow away from the structure in the colder months. "The family spends more time outside than inside, and that's why this big ceiling expands on the outside, enlarging the house towards its surroundings," Collaris told Dezeen.

"The functional programme had the most important influence on the architectural design." 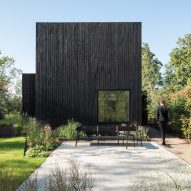 Entry is provided beneath the roof projection on the west side of the home. Common areas including an open-concept kitchen, living and dining room are located on the southern side.

A limited palette defines the interiors, in which Collaris said "nothing screams for attention". Wooden accents such as a coat rack and long dining table contrast the monochrome tones of the floors, walls and ceilings. These were made from walnut trees that were cut down in the construction process.

The north side of the house contains the family's living spaces, which are arranged around a central atrium lit by clerestory windows. "The spread of this programme lead to a central atrium which connects all spaces and brings in light from the most inner part of the building structure," the architect added.

The master suite anchors one end of the longitudinal plan, while two additional bedrooms and a home office line the east facade. On the short end of the home, an exterior spiral staircase leads up to the green roof, which provides a better view of the surrounding landscape.

Other residential projects by the Netherlands studio include a home outside Amsterdam that is meant to appear as a "minimalist sculpture", and a cottage with a steep pitched roof that is covered in blackened timber.