Casely-Hayford will leave his post as director of the Smithsonian National Museum of African Art in Washington, US, to begin his new role at V&A East early next year.

"I feel enormously privileged to be asked to become part of the fantastic V&A team," said Casely-Hayford.

"It has long been the arts institution that I have looked to for innovation and inspiration. And what a brief – working to deliver a new museum for east London. And what a collection – the most thrilling single body of material culture I have ever encountered."

Casely-Hayford was previously an executive director of arts strategy for Arts Council England, and has sat on the board of the National Trust and National Portrait Gallery.

He has lectured widely and advised cultural institutions including the Tate galleries, as well as presenting TV shows including Lost Kingdoms of Africa for BBC Four. He was made an Officer of the Order of the British Empire (OBE) for services to arts and culture in 2018.

He will be responsible for the programming and creative strategy of the museum's Stratford outpost, which comprises a five-storey museum, and an archive collection and research centre. 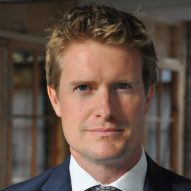 The museum, on Stratford Waterfront in the Queen Elizabeth Olympic Park, is designed by architects by O'Donnell + Tuomey, whose co-founder Sheila O'Donnell was awarded Woman Architect of the Year 2019.

V&A East will host a partnership with the Smithsonian Institution, which manages 23 museums and cultural spaces in the Washington and New York areas, including the institution that Casely-Hayford currently heads.

The storage and research centre, called Here East, is designed by Diller Scofidio + Renfro. Open to the public, the site will house more than 250,000 objects, 350,000 books, and 1,000 archives intended to "reinvent the idea of a museum store as visitor experience".

"This is a hugely ambitious project – for east London, for the UK and for international cultural exchange," said the V&A's deputy director, Tim Reeve, who is leading the V&A East project.

"It offers us a once-in-a-lifetime opportunity to transform how we engage young, diverse audiences, and to revolutionise how our collections are accessed and experienced."

Both buildings are scheduled to open in 2023, as part of East Bank, a concentration of cultural and education centres that will include UAL's London College of Fashion, and a new venue for Sadler's Wells Theatre.

"The V&A is a museum with the appetite and ambition to really shift the way that museums work and engage," said Casely-Hayford.

"I cannot wait to share the magic of V&A East with new audiences and our old friends. We are going to craft dynamic and compelling ways for our audiences to get close to the extraordinary, to be transported across time and geography by the most beautiful and intriguing things," he continued.

"We want to give you the tools to tell and retell your own stories through objects that move you – and to change the way that we think about ourselves and the world."

Casely-Hayford's appointment comes as the V&A continues to expand beyond its South Kensington home. The museum opened an outpost in Shenzhen in late 2017, called Design Society, and a Dundee museum designed by Kengo Kuma opened last year.