The LE speaker range designed by Dieter Rams for Braun in 1959 has been updated and relaunched as a series of smart speakers that retain Rams' minimalist style.

The collection of three premium hi-fi speakers replicates the pared-back aesthetic of Rams' designs, but updates them with subtle visual tweaks and new technologies.

According to Braun Audio, the speakers "celebrate the timeless, essentialist design ethos of their origins" through their pared-back aesthetic and material palette.

Rams created the original LE speaker range for German electronics brand Braun, where he served as head of design from 1961 to 1995. During that period, he launched a range of iconic products that included audio equipment, calculators and watches.

The German firm was responsible for the development of some of the 20th century's most influential audio equipment, including the SK 4 turntable and the TP 1 portable record player and radio.

The company stopped making audio products in 1991, and the Braun name was purchased by Proctor & Gamble in 2005. The current LE speakers are produced by UK firm Pure Audio, which licensed the rights to develop and manufacture Braun Audio products.

Key differences between the new speakers and their predecessors include rounded corners that replace the sharp angles of the original design, and scaled-down proportions that are intended to make the speakers fit more comfortably in contemporary living spaces.

The family of three speakers ranges in size from the large LE 01 to the small, boxy LE 03. The products feature a machined aluminium body and can be accompanied by accessories including floor stands with integrated cable management.

The LE 01 and LE 02 models can be used as individual stereo speakers in landscape mode, or paired to provide single-channel audio when oriented in portrait mode. 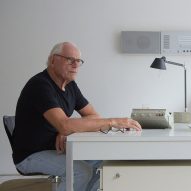 Privacy issues related to the integrated voice-recognition capacity can be addressed by pressing a button on the top of the speaker that enables users to disconnect the hands-free Google Assistant microphones.

London studio Precipice Design worked on all the consumer and trade touchpoints for Braun's relaunch into the audio sector, including packaging, photography, iconography and digital assets.

The strategy focused on preserving a link to Braun's heritage as an audio pioneer, while demonstrating how the new products align with the contemporary lifestyles of their target audience.

In addition to his designs for electronic products, Dieter Rams has a long-standing relationship with furniture brand Vitsœ, which manufactures products such as his 620 chair and 621 side table.

The designer was recently the subject of a documentary by filmmaker Gary Hustwit, who told Dezeen that Rams regrets the role he's played in perpetuating a culture of overconsumption.

Rams himself spoke to Dezeen in 2017, explaining how constant design innovation is less important than focusing on the development of simple products that are made to last.

In his Ten Principles for Good Design, first published in the 1970s, Rams argued that an object's long-term usefulness is intrinsically linked to how it looks. His theories are seen by many as the biggest influence on the approach adopted by Apple for its hardware designs.