Dieter Rams admits playing a crucial part in the global problem of overproduction in a new documentary film. In an exclusive interview, director Gary Hustwit says the German designer regrets not promoting his ideas about sustainable design to the masses.

Released in late 2018, Rams is the first ever documentary on the prolific designer who spent more than three decades as chief design officer at German electronics company Braun and whose work was a major influence on the designs of Apple.

According to Hustwit, Rams feels responsible for the fact that mass production of products is one of the biggest causes of climate change.

"Dieter recognises that he did play an instrumental part in driving the culture of overconsumption that we're currently in, from his time at Braun," the director told Dezeen.

"I think that's one of the things he looks back at with regret," he continued, "regret that he wasn't able to spread his ideas about sustainability further or that perhaps they weren't understood in the right way."

Hustwit thinks Rams, 86, might not have even become a designer if he'd realised the impact of his work on the planet.

"He says himself that if he could have done it all over again, he would not have chosen to become a designer," he said. "He really wanted to be a landscape architect or an urban planner."

To produce the film, Hustwit spent three years with Rams, both at the house in Kronberg, Germany, that he shares with his wife Ingeborg, and following him on his travels. It offers an unprecedented look at the life and legacy of the designer, who is famously very private and rarely agrees to interviews.

"I think the reason why he agreed to this film was because he saw an opportunity to push his philosophy further and to re-engage a new generation of designers with his ideas about what good design is," said Hustwit.

"As a legend in the design world, of course I wanted to celebrate him as a key part of its history," he continued.

"Dieter's impact on the world of design is undeniable. Most people will have owned a Rams-designed product at some point in their life – be it a chair, a toothbrush, a radio or a calculator."

Among the many successful products Rams developed at Braun, between 1961 and 1995, were the SK 4 radio, the RT66 calculator and the S60 razor. He also developed iconic designs for London-based furniture brand Vitsoe, including the Model 601 chair and the 606 Universal Shelving System.

He is perhaps best-known for his Ten Principles of Good Design published in the 1970s, which called for all design objects to be functional, long-lasting, beautiful and environmentally-friendly.

These principles defined the "less but better" aesthetic that came to define all of Rams' work. Hustwit thinks that, with today's focus on sustainability, Rams' philosophy is "more relevant now than ever". "We live in a culture of overconsumption and mass production of objects and technology, most of which we don't actually need," Hustwit said.

"We need to start designing things with a sense of responsibility and consider whether we really need some of the products we're producing so much of."

Documentary designed to be "as simple as possible"

"The goal was to keep it as simple as possible," said Hustwit. "It just wouldn't be appropriate to make a cluttered film about Dieter Rams. Less but better, as Dieter would say."

"We had a copy of the principles tacked to the wall of the editing room during the editing process. It was something we kept coming back to," he added.

The visual look of the film, as shown in this exclusive clip, is intended to follow Rams' principles

Hustwit enlisted ambient musician Brian Eno to create original music to accompany the film, in line with the minimal aesthetic of the film.

"I felt there was a connection between Dieter's design sensibility and Brians music," he said. "But even though this film is about design, it touches on some really urgent topics such as materialism and sustainability." 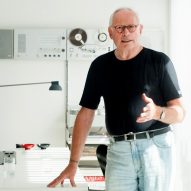 Hustwit has previously directed three documentaries on design including Helvetica, exploring graphic design and typography, and Urbanized, which looked at the design of cities. The director previously featured Rams in Objectified, which looks at our relationship with objects.

These films and Rams are all available to stream on pay-per-view from Hustwit's website.