A "dream home" built on the "tightest of budgets" by architects McGonigle McGrath has been named by the Royal Institute of British Architects as the UK's best house of 2019.

House Lessans, which stands on the site of an old farmstead in County Down, was chosen over six other architect-designed homes vying for the annual Royal Institute of British Architects (RIBA) House of the Year prize.

It was named as this year's winner during the final episode of the Channel 4 television series Grand Designs: House of the Year.

Belfast studio McGonigle McGrath designed House Lessans to meet the needs of a semi-retired couple and their children, who have left home but occasionally visit and stay.

It is formed of two pared-back volumes with walls made from white-rendered concrete with pitched zinc roofs, designed to complement the neighbouring agricultural outbuildings.

"House Lessans demonstrates that life enhancing architecture does not have to cost the earth" he said.

"McGonigle McGrath have used simple and cheap materials to create a truly bespoke home that resonates with its owners and its context. Even with the tightest of budgets, House Lessans shows that a dream home, designed by a talented architect, can be a reality."

One wing of the house contains a suite of three bedrooms, while the second hosts the communal living spaces that includes a double-height living room.

Like the exterior, all the rooms have simple finishes. The focus is on views out over the landscape that are framed through expanses of glass.

The house was chosen for RIBA House of the Year by a panel including Tom Miller of Haysom Ward Miller Architects, last year's winner of the award, and John Pardey as chair. 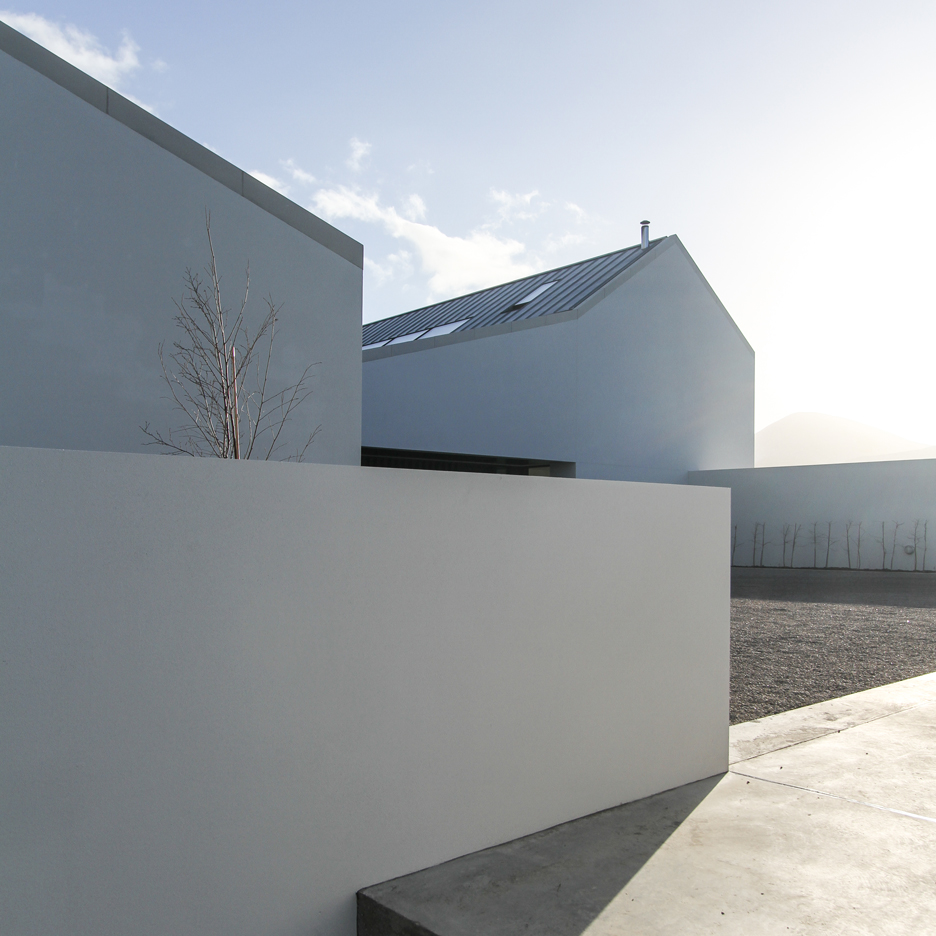 "It has an elegant simplicity achieved within a remarkably low budget without excesses, creating delight in the subtly changing volumes as well as its relationship between the inside and outside," Pardey added.

"The house takes the daily business of life and with the architects' skills in making a house from simple materials, carefully detailed and with precise alignments, succeeds in becoming not just a house, but more importantly, a home."

Over the four-week run of the TV series, the list was cut down to a shortlist of seven projects. This included Pocket House by Tikari Works, Nithurst Farm by Adam Richards Architects and Secular Retreat by Atelier Peter Zumthor.

House Lessans was the second project by McGonigle McGrath to have been shortlisted for the prize, following House Maghera's nomination in 2015, which lost out to Flint House by Skene Catling de la Pena.

Last year, the RIBA House of the Year prize was also awarded to another humble rural dwelling. Named Lochside House, it was designed by Cambridge studio Haysom Ward Millar Architects for a ceramic artist and functions off-grid.

Other winners of the prize include a "box of tricks" house in Edinburgh and a dwelling that references the hop-drying towers of the Kent countryside.

Photography is by Aidan McGrath.