ASWA Studio has designed as its architecture studio in Bangkok around a fully glazed internal courtyard that brings daylight into the building.

Thai studio ASWA built its office, which contains working spaces for up to eight staff members, a meeting area and a model-display zone, on a 100-square-metre plot that was previously used for car parking.

The office is built around a six-square-metre courtyard, which is surrounded by glass walls. Workspaces and a model making space are wrapped around the courtyard, which has been inhabited by birds, squirrels and frogs.

"The natural light contributes beautiful shade and a great view for the studio," explained Phuttipan Aswakool, co-founder of ASWA.

The exterior of the studio is clad with dark green corrugated metal sheets. Each of the external facades has no more than two openings to limit views out and creates a contrast with the fully glazed walls facing into the courtyard.

The character of the studio was the reasoning behind the mostly internal views, explains Aswakool.

"Personally, we are a bit introvert," he told Dezeen. "We love to concentrate in our own space and don't like to expose everything to everyone."

The asymmetric hip roof, which is also clad with corrugated metal, has been designed so that it is highest above the office space where the team works. 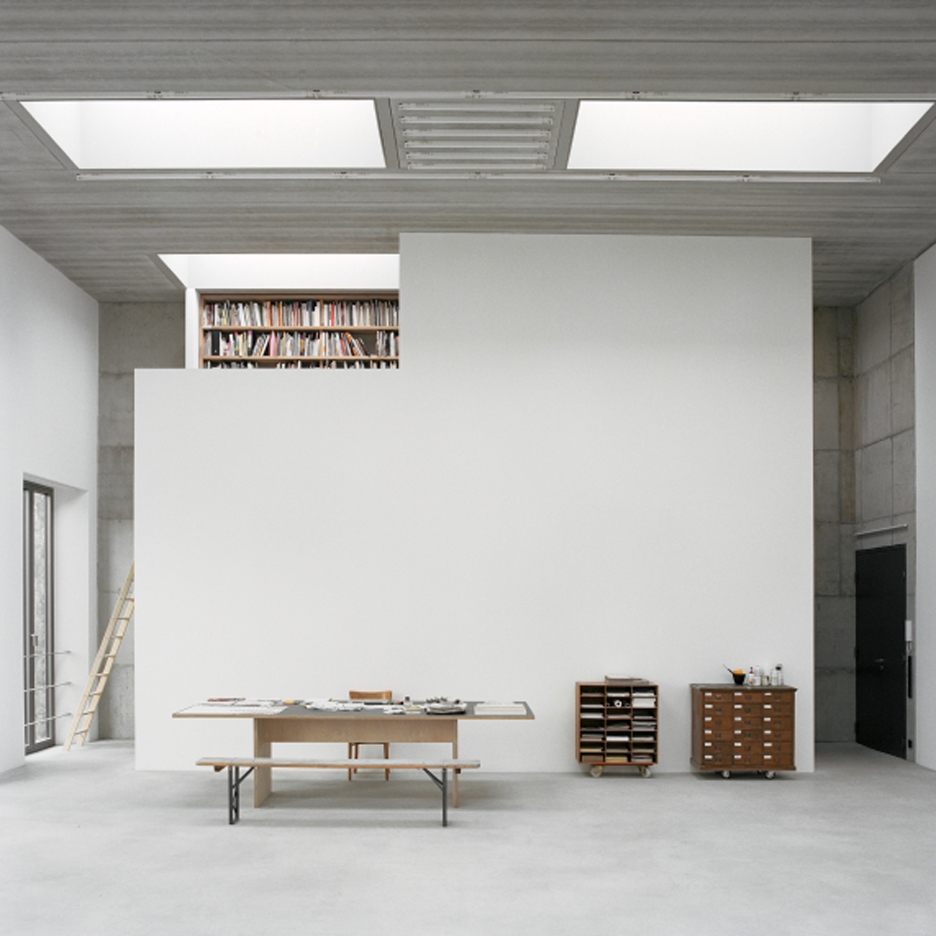 12 design studios that architects have created for themselves

The roof has a steep slope to help the functionality of a rainwater drainage system, which collects  natural water that is fed into the courtyard.

Inside the office the working areas are located in the area with high ceilings underneath the roof's point.

Storage and shelving displays for models are located where the ceiling height is lower as team members frequent this space less.

Black window frames and chairs highlight the all-white interior, designed by the studio as a blank canvas for their activities and work.

ASWA, which stands for Architectural Studio of Work Aholic, was founded in 2013 by Aswakool and Chotiros Techamongklapiwat. The duo explained to Dezeen their previous office space was a small apartment room, which their growing team eventually outgrew.

In Chicago, Moss has also self-designed a studio, which is also organised around a central courtyard.