Kids can identify plants, flowers and wildlife in their area while adding to a global biodiversity database that helps monitor the planet's health, using the augmented-reality app Seek by iNaturalist and the WWF.

Described as "like Pokémon Go for nature", Seek lets users point their smartphone camera at any plant or animal species to identify it in real time.

Anyone can use the app, although the main target is children and youth, who the Worldwide Fund for Nature (WWF) describes as "increasingly aware of the issues affecting their planet".

With the permission of the user (or their parents if they are under 13), the app sends collected data to iNaturalist's global biodiversity database, helping scientists to track the health of the planet.

Seek was created by iNaturalist, a large online science community, in partnership with conservation organisation WWF and Netflix series Our Planet.

To optimise the chances of a match, Seek has live image recognition — it scans its database while the user has their camera open and before they take a photo.

It even guides their positioning of the device so that they can capture enough of the subject's features, at the right angle to increase the chances of success. 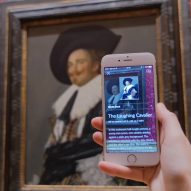 New app Smartify functions as "a Shazam for the art world"

This is an improvement on the past version of Seek, released in 2018, that required users to take a photo before attempting identification.

Once Seek has identified the plant or animal's species, it prompts the user to take a photo, unlocking further features of the app.

It awards the users with "badges" that go towards completing various challenges, such as a "connectivity challenge" to discover ten species living nearby and a "community challenge" to capture a species representing every level of the food chain.

"Young people are increasingly demanding that our leaders take action to protect our planet," he said. "Resources like the Seek app are vital to help them learn more about the wonders of our natural world and be part of scientific efforts to understand the impact we are having."

According to a recent United Nations report, up to 1 million species are at risk of extinction in the coming decades.

Afterwards, SOM architect Doug Voigt argued that architects should act to improve the situation through urban design in an opinion piece.