The Object is Absent is a multi-strand installation that focuses on the designers' bodies rather than the objects they create, to demonstrate a shift in the priorities for the next generation of makers.

The exhibition at the MU Space in Eindhoven during Dutch Design Week brought together twenty projects across various different media, encompassing theatre, music, film, and even dance.

Co-curators Alexandre Humbert, who teaches at Design Academy Eindhoven, and Lucas Maassen intended the "ever-moving" exhibition to be "experienced and performed as a manifesto for less materialistic design".

They worked alongside Angelique Spaninks from creative network MU and curator and designer Tom Loois to realise the show.

"The upcoming generation of designers are not making things or physical objects any more, but are using their bodies, using dance, using video, using pictures and using sound, as a transmission of storytelling or an emotion," explained Humbert to Dezeen.

"There's a real questioning for designers of why shouldn't we use existing objects, or people, or the designers themselves."

Unlike most exhibitions, which focus attention on the objects on display, The Object is Absent instead explored the act of making. It placed the designers, their attitudes, ideas and even their bodies at the centre of the work.

"What better moment than Dutch Design Week to turn away from the square-metre fair stands and give the floor to the people instead," said the co-curators.

"The Object is Absent takes this to its final consequence: the exhibition is entirely about acting design, singing design, dancing design and tasting design."

Humbert's Object Interviews was one of the projects in the show. A collection of 19 one-minute videos, the work looks at how design objects exist on their own by showing them in conversation.

It examines how we can create meaningful spaces by building with our bodies rather than with regular construction materials.

"They are delineating the space with their bodies, creating walls, creating doors, creating corridors," said Humbert.

Humbert and Maassen also presented an ongoing work called The Living Room. For this, they have photographed nearly 100 well-known architects, designers and curators against a white backdrop as if they were items of furniture.

The pair will compile the images into three photo-collages of imagined living-rooms, with the creatives impersonating the objects within.

As well as the designers, the exhibition also puts the visitors at the centre of the work, by engaging them with the work.

In the Action Shop, for example, designers teach visitors how to create a particular action or movement, rather than offering them a physical object to take away from the show.

"It's about giving the space back to the people, so it's about how do you treat the audience as the subject of the design, how do you play with them, as research methodology," said Humbert.

Designer Mark Henning greeted visitors to the exhibition with a handshake at its entrance, as an ongoing experimental research project, called Normaal space, which looks at what the commonly used greeting says about those who use it.

Designer Alvin Arthur danced in the space for the duration of the show, and invited visitors to join him. 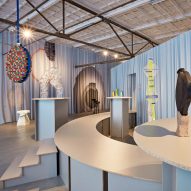 Contatto Experience by Giulia Soldati was also part of the exhibition. It is a project that removes any distance between food and its eater by focusing on the hand as plate and utensil. It aims to emphasise the sensorial experience of preparing a meal.

Meanwhile, Ivi van Keulen's Sanding Time saw the designer spend the duration of the design week sanding a wooden chair down to sawdust by hand.

Noud Sleumer also looks at the act of taking things apart in his De-Design Demos, leading visitors in the act of unmaking to explore the material and philosophical implications of the process.

By using the designer and their body to create the work, the exhibition aims to show that it is possible to move towards a different way of living, with a renewed relationship between people and things.

"With this show we take a leap into the unknown, towards an all-compassing new way of being; a more healthy, interesting lifestyle without waste, without inequality," said the curators.

By owning fewer things and having a different relationship with those that we own, we will in turn create less of an impact on the world around us, the co-curators said.

"Change is happening at an alarming rate – melting poles, warming oceans, burning forests, exponential technological innovation. It is not just the climate zones that are moving: power is shifting too, on a global scale as well as locally," they continued.

"We urgently need to create new relations and values between people, and between things and people."

Dutch Design Week 2019 took place from 19 to 27 October. Other installations during the week included a temporary events space, called The Growing Pavilion, constructed from mushroom mycelium panels, while interpretations of "the circle" were presented at the Dutch Invertuals exhibition.

Photography is by Dave Menkehorst.