Canadian architecture firm RDHA has added glazed volumes to an old limestone post office in Cambridge, Ontario as part of its transformation into a community centre with makerspaces.

RDH Architects Inc (RDHA) renovated and expanded the landmarked masonry structure – completed by Canadian architect Thomas Fuller in 1885 as a government building, and then later turned into post office – as it had fallen into disrepair on Cambridge's Grand River.

Created for the city's library system, which rebranded as the Idea Exchange in 2015 to offer public library services, programmes and events, the community centre aims to rethink the format of the traditional library.

Rather than containing shelves filled with books, the Idea Exchange Old Post Office instead has makerspaces, audio and film studios, a children's discovery centre, a cafe and lounge. Because of this, it is billed as "Canada's first bookless library".

The Idea Exchange Queen's Square branch has an extensive book collection and is located just across the river.

RDHA's project preserves a number of elements from the original building, including pillars, archways and stained glass windows. Its slate roof was also restored.

The two additions extend outwards over the riverfront; one runs along the base of the building over the water's edge, while the other protrudes at a 90-degree angle near the top.

"The multidimensional architecture communicates from all sides, exuding intelligence and practicality as it deftly merges old and new," said RDHA.

The glass volume at the base is raised 20 feet (six metres) over the Grand River and is designed to be buoyant in the event of a major flood.

The portion of its cantilevering underbelly is clad with polished aluminium panels, as the path below is intended to be later redesigned as a riverwalk in the future.

A custom ceramic frit pattern is laid across the extension's windows and acts as a barrier against strong sunlight, and is based on the ornamentation of the original facade.

"Floor-to-ceiling windows make the additions transparent and inviting to passersby when illuminated at night, and create dazzling reflections on the water below," said RDHA.

Inside this lower glazed volume is the heart of the Idea Exchange Old Post Office centre, with an open space filled natural light and expansive views of the river and city. Various chairs and tables and an information desk are located on this first storey.

RDHA also created a glazed foyer inside to offer views of the historic part of the building. Two stairwells are located on either side of the building on the ground floor, which also has an elevator.

Another area located on the first floor is a cafe, which is accessed from walkways that are flanked by openings that offer glimpses to the lobby below. The bridges access the historic part of the building, where the cafe is located, with former windows used as doorways.

Glass railings contrast with the limestone walls that are left exposed, and are a continuation of the glass-limestone combination outside.

The second level has a children's discovery centre focused on STEAM learning (science, technology, engineering, arts, and math), as well as bathrooms, storage and access to a green roof.

On the third floor are a boardroom, located in the glazed addition, a laser cutting room, and a makerspace in the attic of the 19th-century portion. Original steel trusses are exposed and the room is entirely white, while a glass ceiling reveals a historic clock tower. 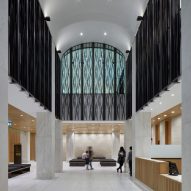 Fuller, the architect of the limestone building, also created Canadian parliament's Centre Block and Library buildings on Ottawa's Parliament Hill in Ottawa, which was updated with a new visitor centre by Moriyama & Teshima Architects.

RDHA is based in Toronto and was founded in 1919. Another project by the firm is a concrete library building embedded into a hillside in the city of Hamilton. Both Cambridge and Hamilton are to the west of Toronto, and are about an hours drive from downtown.