The Government of Canada Visitor Welcome Centre (VWC) serves as the new public entrance to Parliament Hill, the home of Canada's parliament.

Moriyama & Teshima Architects served as design architects on the VWC, working in partnership with IBI Group as the prime consultant.

The national historic site in Ottawa, commonly known as the Hill, has a suite of Gothic Revival buildings dating back to the late-1800s. These feature stonework, archways, pillars and soaring ceilings reminiscent of medieval European architecture.

The VWC is the first new major addition on Parliament Hill in over 75 years, and is designed to improve security and enhance circulation between various buildings.

The Hill comprises three edifices arranged around a central lawn, with the Centre Block for the Senate and Commons chambers and the East and West Blocks as ministers' and senators' offices.

"At once a building project and a landscape intervention, the VWC provides a literal and metaphorical bridge between building and landscape, as well as contemporary and heritage architecture," Moriyama & Teshima Architects said.

The VWC is a subterranean structure inserted into a sloping site, measuring 450,000 square feet (41,806 square metres) across two levels.

On the top level is the main entrance, ticketing desk, room for security and scanning, restrooms, a cloakroom and exit. The floor below features these amenities along with gathering areas, a gift shop, information desk and back-of-house rooms. 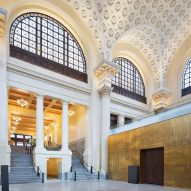 To enter, visitors descend through a procession of compressed and expansive spaces with low, cross-vaulted white plaster ceilings. Escalators and stairs lead to a lower level, which features a series of marble-clad columns.

"Enriched with a new layer of contemporary form, the design seamlessly knits the heritage fabric into the present," Moriyama & Teshima Architects said.

Double-height pillars reach up to support dramatic vaulted ceiling on the floor above.

Both the vaulted ceilings and the columns take cues from the soaring Gothic Revival architecture seen around Parliament Hill.

Interior details and finishes are inspired by the site's heritage, and express an elegant material palette with Adair limestone, Danby marble and white oak.

"A sense of grandeur is evoked through a modern interpretation of vaulted ceiling forms, ornamental details and filigree in keeping with the Gothic Revival attention to craft," the firm said. 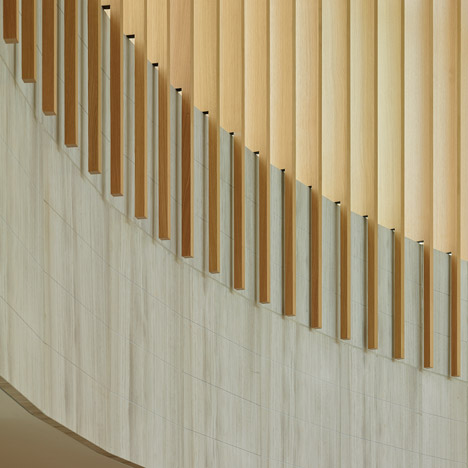 Among these details are the pleating technique features on the columns, with similar folds applied on wood panelling and bronze stair handrails inside. Gothic-inspired elliptical archways are also prominent.

Woven bronze filigree screens frame the atrium and allow views from the upper concourse to the level below. This metalwork echoes the twisted ornamental forms on existing neo-gothic guardrails and gates seen across the Hill.

To further integrate the project with the surroundings, the building features existing heritage flagstaff and retaining walls that were extended down into the construction.

The project is the first phase of the VWC's construction and is part of a 20-year, multi-billion-dollar rehabilitation of Parliament Hill. Additional phases will expand the building to connect with the complex's East Block and Centre Block.

A barrel-vaulted passageway, known as the Galleria, connects the VWC to the West Block where the interim House of Commons lives, while the Senate of Canada building is temporarily housed in a Beaux-arts train station overhauled by Diamond Schmitt Architects.

Other projects in Ottawa are Canada's National Holocaust monument laid out like a warped Star of David by Studio Libeskind with a terrace facing the parliament buildings, and a brutalist National Arts Centre by Diamond Schmitt Architects that also overlooks the Hill.

Based in Toronto and founded in 1958, Moriyama & Teshima Architects has also designed a university innovation centre with slatted aluminium walls, Toronto's Ismaili Centre in with Charles Correa Associates, and the Aga Khan museum also there with Japanese architect Fumihiko Maki.