Hall manipulated coils of clay into three-dimensional forms that reference scenes from the 14 Stations of the Cross, depicting Jesus Christ on the day of his crucifixion, which gives the project its name.

The images are translated into abstract lines that become more distorted as the viewer moves around the piece.

The artist said the project was inspired by John M Allegro's controversial 1970 book, The Sacred Mushroom and the Cross, which suggests that the origins of Christianity are linked to cult practices such as ingesting hallucinogenic mushrooms.

"I have a fine art background so I'm also interested in painting," she told Dezeen. "These sculptures are loosely based on religious images, but in a really psychedelic, distorted way."

The sculptures are made from standard earthenware clay that was extruded into coils and draped over a supporting framework before being fired to harden the material.

Hall claimed that the biggest challenge she encountered was finding a way to manipulate the material into the desired forms and then move them to a kiln for firing.

She used wood offcuts found in the university's workshop to fashion external support structures that the earthenware coils were draped over. These were allowed to dry before being inserted into the kiln and supported using other available materials.

"It became more of an architectural challenge as the project progressed," Hall recalls. "My tutors were telling me there was no way I could get earthenware to stand upright at that scale and not break." 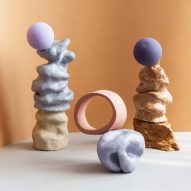 The artist claimed that early experiments resulted in numerous breakages, but she gradually developed a process that has allowed her to craft sculptures standing over a metre in height.

"I'm really proud that I managed to defy gravity and bring something really new to ceramics," Hall added. "I don't feel like I've really seen anything else much like it."

Each of the artworks is decorated using brightly coloured, low-fired earthenware glazes. Hall claimed the colours evoke the psychedelic trips that inspired the project, and are a deliberate contrast to the "beige and neutral ceramics" currently popular with collectors.

The project was exhibited during the London Design Festival in September at design shop Mint's Raw exhibition. Hall is continuing to develop the pieces alongside working on a new collection at her Hammersmith studio.