Architecture and design magazine Metropolis has been acquired by media company Sandow.

The company's CEO Adam Sandow said he was "thrilled" to add Metropolis to its roster that includes publications Interior Design and Luxe Interiors + Design, materials consultancy Material ConneXion, and Material Bank, an online open-source for architects and designers.

Sandow will take over the reigns from Eugenie Havemeyer, who established Metropolis with her husband Horace Havemeyer III in 1981. She has continued to lead the magazine following Horace's death in 2014.

"I have always admired Metropolis' distinct point of view and thoughtful coverage of the A&D community," Sandow said. "Horace Havemeyer created an extraordinary editorial platform and we are grateful to Eugenie Havemeyer for putting her trust in Sandow."

"I am very pleased that Metropolis will join the Sandow portfolio," Havemeyer added. "There are synergies between both brands that will help Metropolis take its legacy forward and support the future of the architecture and design community." 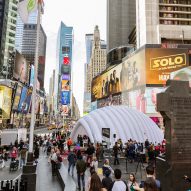 Sandow to manage NYCxDesign from 2020

Avinash Rajagopal will continue as editor-in-chief and moderator of Metropolis-branded events like the Think Tank, which discusses key contemporary issues, and Metropolis: Perspective focused on Sustainability.

"Metropolis will remain an independent voice"

"Metropolis has spent almost 40 years building the trust of the design community and, working with Avi and the Metropolis edit team, we are excited to build upon its incredible," Sandow said.

"Metropolis will remain an independent voice at Sandow, continuing their thought leadership role across platforms."

Founded as a New York City-focused print magazine, Metropolis expanded its architecture and design coverage to include global content, a range of design disciplines, and an accompanying website.

It proved influential in establishing New York's design community, acting as the founding sponsor of the International Contemporary Furniture Fair and producing the annual NYCxDesign festival guides. Its other initiatives are the #Metropolis Likes awards, which selects top talent from New York's design week.

The acquisition follows news at the beginning of this year that Sandow will take over management and operations for the NYCxDesign from 2020.