Los Angeles clothing brand Lunya has created its New York store with vintage and contemporary finds to decorate zones as if they were a dining room, bedroom and living area.

Ashley Merrill, who founded the women's sleepwear brand in 2014, has designed the New York City shop to be like a local apartment filled with a mixture of mid-century, traditional and contemporary furniture.

The home-like aesthetic follows Lunya's other outposts – including its Brooklyn location in Williamsburg – but aims to draw on the eclectic style of the city's residences.

"New York City is a place fluent in mixing, home to the docks where many peoples from countries near and far first landed in America," she said. "It has a longer American history than our California coast, so it felt right to mix in elements from earlier European design to pay homage to the elongated timeline."

"The Nolita store was designed to pay homage to the glitzy, upscale New York apartment with notes of minimal modern mixing with opulent European styles."

Colourful rugs, potted plants, gold-framed mirrors, black sconces, candles and other decorations also make the store feel like a lived-in home rather than a store.

The back is arranged to resemble a bedroom with a walnut Rococo-style headboard and white linens. A changing room is also located in the rear.

In the middle of the shop, the dining area features a late-20th-century French table in a wood, oval construction, black metal chairs, and a black light fixture above.

A plush navy sofa is paired with a decorative glass coffee table and two Barcelona chairs in caramel by architect Ludwig Mies van der Rohe, and evokes a living room. A vintage stone mantle rests against the wall and gives the illusion of a working fireplace, and was found by Merrill on Etsy. 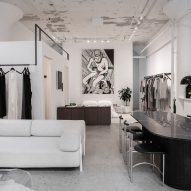 At the entrance of the Lunya store is a vintage cream Etcetera lounge chair by Swedish designer Jan Ekselius from Chairish, an HKLiving Sungkai woven cane room divider, and a yellow oriental rug with fringe.

Interspersed throughout are black clothing racks with Lunya pieces, including washable silk garments, in addition to several art pieces such as a black-and-white painting by Vicky Barranguet.

Most the art is sourced by Saatchi Art, including a blue piece by Stephen Crimini and a greyscale pair by Seunghwui Koo.

Other stores in New York City are Nordstrom's new outpost with a bar and lounge by Rafael de Cárdenas, an Arrivals pop-up centred around weather, and a renovated, subterranean Apple Store by Foster + Partners.