American studio  The Ranch Mine has completed a residence in Phoenix that features a mix of gabled and flat volumes wrapped in corrugated metal, white stucco and honey-toned wood.

The Pleats house is located near the Dreamy Draw Mountain Preserve, just north of Uptown Phoenix. The clients – proud owners of two rescue dogs – purchased the property over a decade ago, drawn by the natural topography and open space.

The site had an existing house dating to 1952, which the clients planned to renovate or replace once they found the right architect.

"From the day they moved in, their goal was to remodel the house to fit their lifestyle – modern yet warm, functional yet original, minimalist yet inviting," said local firm The Ranch Mine in a project description.

"After a decade of living below their means and surviving the Great Recession saving every penny they could, the homeowners reached out to us with a modest budget and big dreams."

The team conceived a U-shaped dwelling that is organised around a central courtyard with a swimming pool. The foundation of the original home was retained, but the rest of the structure was demolished.

"To save money, the foundation of the original house was reused and the space was redesigned to fit the bedrooms, including a master suite that was lacking before," the studio said.

The three volumes that make up the 1,850-square-foot (172-square-metre) residence each have a distinct shape and function.

One has a tall, pointy roof and encompasses the public zone. Adjoining this volume is a long, low bar that contains the bedrooms. 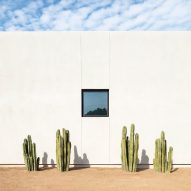 The third component – a garage and workshop – also has a gabled roof. Located in the back of the property, this area is accessed via a gravel driveway that runs alongside the house.

Facades are wrapped in a mix of hemlock wood, dark metal and white stucco. For the exterior aesthetic, the team took cues from the saguaro cactus, which is native to the region.

"The house draws its name, Pleats, from the corrugated metal that wraps the gabled volume, reminiscent of the pleated exterior of the cactus," the studio said.

"The gabled entry features a patterned, wood rainscreen that evokes the forked ribs of the cactus, while the recessed entry is akin to a saguaro boot – the holes in the giant cacti that many desert animals use as their homes."

The interior provides shelter from the intense desert sun, while still offering views of the mountains and a connection to the landscape.

In both the public and private areas, sliding glass doors open directly into the central courtyard, allowing for indoor-outdoor living. A large patio is covered with a perforated steel canopy that provides ample shade.

"The tall roof of the gable adds additional shade to the courtyard from the intense afternoon sun," the team said.

Decor and finishes draw upon multiple sources, including mid-century modern design and sleek hardware from Germany and Italy. The clients also requested the integration of industrial-style materials, such as concrete and stainless steel.

"To meet this request, the hardware, fixtures and appliances were chosen for their clean and European design, while finishes like walnut cabinetry, accent lighting and furniture add some mid-century flair," the team said.

Founded in 2010, The Ranch Mine is led by the husband-and-wife team of Cavin and Claire Costello. Other projects by the Arizona studio include a modern courtyard home that alludes to Georgia O'Keeffe paintings, and a canal-side home that is based on the missions built in the American West over 200 years ago.